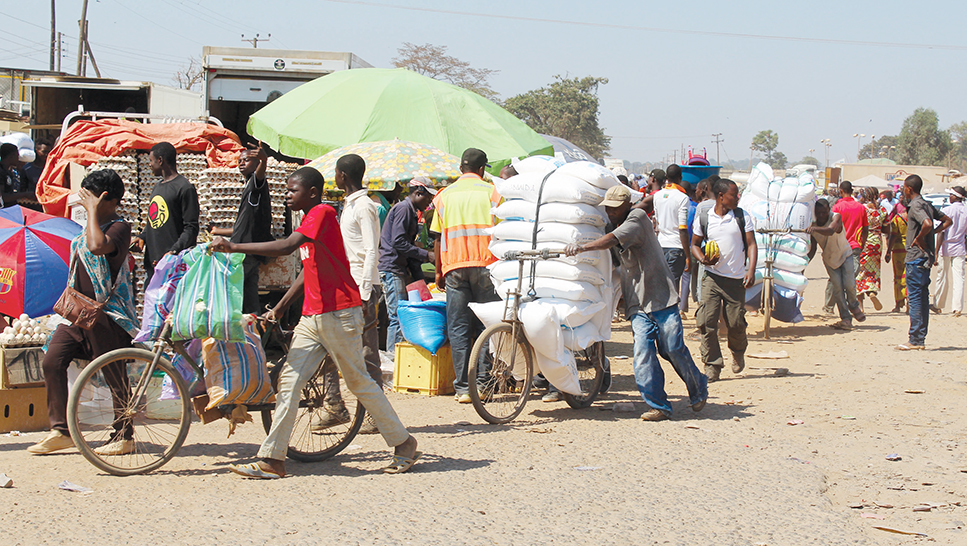 NKWETO MFULA, Chililabombwe
KASUMBALESA one-stop border post is located about 18 kilometres north-east of the Chililabombwe central business district and is mostly a congested place, thanks to the huge volume of trade between Zambia and the Democratic Republic of Congo (DRC).
Other goods that enter the DRC from various southern African countries also pass through this border.
About 400 to 900 heavy trucks laden with various goods cross over either side of the border point every day, thereby making it one of the busiest entry points of the country.
On the other hand, smuggling of goods into the DRC, which was too rampant in the past, seems to have reduced following the construction of a trade corridor on the DRC side.
And the bustling business activities at the border have attracted a number of firms to set base at Kasumbalesa.
This also is as a result of a yawning market in the DRC, which has resulted in a good number of companies establishing their presence at the border.
These firms include millers, bakeries, those dealing in beef, agro products and other companies that export or conduct different business activities at the one-stop border post.
A number of warehouses have been constructed at Kasumbalesa market that act as storage sheds for exporters of goods into the DRC.
A South African firm, Fruit and Veg City, is also planning to set up a wholesale centre at Kasumbalesa, the move which has been welcomed by the people of Zambia and those in the DRC.
The Cross Border Traders Association (CBTA) is also looking forward to establishing an agricultural storage facility at the border to store perishable goods in transit to the DRC.
CBTA chairman general Charles Kakoma says storing perishable goods at the border has been difficult and traders end up losing out on both their goods and capital.
â€œWeâ€™re looking forward to constructing an agricultural centre for storing perishable goods such as vegetables, fruits and other agricultural produce,â€ he says.
However, the busy state of the border has also attracted some illegal activities that include a black market for foreign exchange dealers.
Despite the presence of registered financial institutions at the border post, foreign currency vendors are very active as they take advantage of the high number of traders and the travelling public to conduct their business.
In a bid to curtail the illegal exchange of foreign currency, which results in the country losing out, Government is considering introducing a statutory instrument (SI) that will allow traders and companies at Kasumbalesa border to transact in United States (US) dollars.
Minister of Finance Felix Mutati says Government is soon expected to introduce an SI that will allow transactions to be conducted in dollars at Kasumbalesa border which will lead to channelling of about US$40,000 from the black market into the formal system.
â€œ[For instance] Zambeef has an outlet at Kasumbalesa border but the challenge is that under the current law, the company is not allowed to transact in dollars. So the buyers from DRC have to change money from the black market worth US$30,000 to US$40,000 being sold on the black market daily,â€ Mr Mutati says.
Most Congolese nationals move with US dollars when conducting businesses, and Mr Mutati believes that allowing transactions in dollars at the border will help Zambian businesses.
The DRC market remains one of Zambiaâ€™s largest markets and facilitating smooth trade at Kasumbalesa border will go a long way in growing the market for Zambian firms.
Economist Lubinda Haabazoka, who is also Copperbelt University senior lecturer in the School of Business, says allowing business transactions to be conducted in dollars will beef up foreign exchange on the local market.
â€œWhat Government is doing is to bring sanity to the market because the issue of dealing in foreign exchange is always associated with confusion at the border,â€ he says.
Mr Haabazoka says the governments of Zambia and the DRC should come up with measures to ensure that Zambian traders do not just end up doing business at Kasumbalesa border but also reach Lubumbashi.
Noel Mubanga, 44, a poultry farmer, is happy with the development as he believes it will be easy to do business once the proposed SI is introduced.
Mr Mubanga says Government should be commended for the move and that it should quickly introduce the SI as it is beneficial to Zambian businesses and the nation as a whole.
â€œIt will be easy to do business because our friends use US dollars in their country when transacting,â€ he says.
Mr Mubanga, who has been a poultry trader for five years, says poultry products have a ready market in the DRC.
That is why he cannot wait for the introduction of an SI which will enable traders at Kasumbalesa border to transact in dollars.