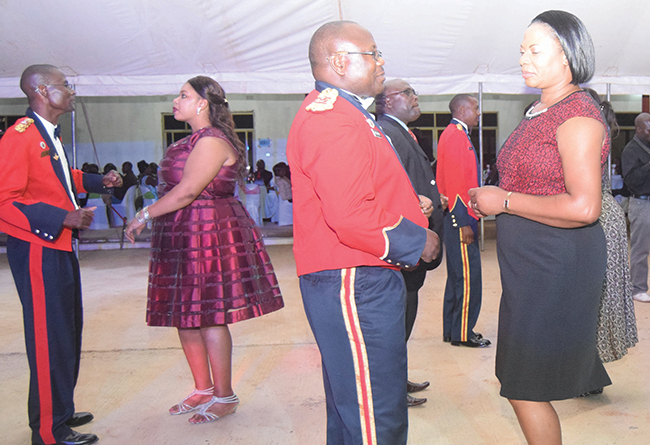 KELVIN KACHINGWE, Lusaka
DEPUTY Army Commander Topply Lubaya has urged military men and women to distinguish themselves by being professionals as the nation goes to the polls in about seven monthsâ€™ time.
Major-General Lubaya said this year will have its own challenges as there will be a lot of politicking in light of the elections which will be held under a new Constitution which President Lungu assented to on January 5.
The new Constitution, among other provisions, provides for the winning presidential candidate to obtain more than 50 percent of the votes as well as for a running mate to be voted for alongside the President.
â€œAs military men and women, you know very well your call of duty to distinguish yourselves by being professional, loyal to the government of the day and being non-partisan and ensuring a peaceful period in your great nation,â€ Maj Gen Lubaya, who is also the Army chief of staff, said on Friday at the annual ball for warrant officers and sergeants at Arakan Barracks.
â€œFurther, let me take advantage of this event to encourage you all to continue working hard on all your assigned tasks. Apply yourselves fully in all your undertakings both at work and at individual level.
â€œBe encouraged to pursue activities aimed at improving your livelihood at family level and avoid being retrogressive by being negative on issues, but be creative and make a difference to both the system and your family.â€
The chief of staff also had some advice for officers about to retire, cautioning them to start preparing themselves now.
â€œIf you have not bought or built a house, please start now because time is running out. Prepare adequately for your retirement to avoid destitution,â€ he said.
â€œTo the families, Iâ€™m pretty sure you all understand that men and women in uniform are always on the move for training, operations and other duties. It calls for responsibility for those that remain at home.
â€œRemember the consequences of promiscuity to your lives and the negative impact when you fall ill. HIV/AIDS is still ravaging many families and, therefore, the fight continues. It is that personal discipline that will make a difference.â€
Maj Gen Lubaya said there will be a turning point in the army as it has embarked on a modernisation process that will make it easier for it to function.
And Warrant Officer Class One Paston Mwanakanje commended the army leadership for the pace at which it was undertaking the modernisation process for the army, which has enhanced professionalism among troops.
He appealed to the command to help them complete the construction of modern banquet hall at Garrison Warrant Officersâ€™ and Sergeantsâ€™ Mess.