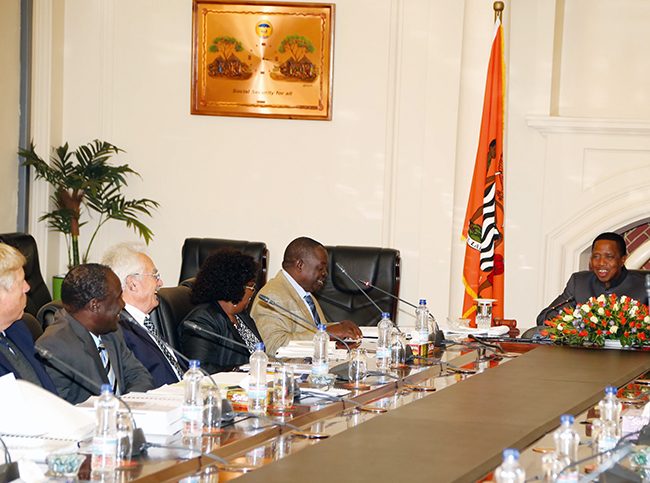 YANDE SYAMPEYO, Lusaka
GOVERNMENT has challenged farmers to be competitive and produce more maize if they want the 10 percent tax on exports to be waived.

President Lungu says Government introduced the tax on maize exports to preserve food security and not as a measure of revenue collection.
Mr Lungu said farmers should therefore invest heavily to produce more crop for local consumption and export.
“The idea is to have a mechanism that will allow us reserve enough for ourselves and export and at the same time encourage farmers to invest in the crop,” Mr Lungu said.
The Head of State said this yesterday when he met officials of the Zambia National Farmers Union (ZNFU) led by its president Jervis Zimba.
The President said Government has been discussing the matter and will soon announce a lasting formula.
And Minister of Finance Felix Mutati said he will on Tuesday announce a benchmark or target which farmers will have to meet to qualify for a waiver on exports.
He said the benchmark will be a motivation to encourage farmers to produce more.
Mr Mutati said Government wants to address the bumper crop harvest and part of the solution lies in the exports.
“Whether we shall peg it at production of 2 million or whatever, we shall announce. So if  in a season the production of maize is in excess of 2 million for example, the 10 percent drops off to  encourage export. If it is below that level, obviously then we got to protect ourselves,” Mr Mutati.
And Mr Zimba said the 10 percent tax on exports is taking a toll on farmers, especially the small-scale farmers.
Mr Zimba said tax on exports coupled with the council levy and toll gate fees have impacted negatively on the pricing of the produce.
He said government should consider standardising the council levy as it is currently ambiguous.
Mr Zimba further appealed to the Food Reserve Agency (FRA) to consider indicating the price at which it will procure maize in the next marketing season to save farmers from exploitation by private buyers.
“Farmers are waiting to see the price at which FRA will be buying. If FRA could tell us what they will be buying at, perhaps   farmers will be patient and wait,” Mr Zimba said.
And a local commercial farmer has called on Government to protect potato growers from cheap imports from South Africa, reports Jack Zimba in Lusaka.
Stuart Cooke, who is managing director of Chartonel Farms in Lusaka, said a lot of cheap potatoes have been allowed onto the Zambian market from South Africa and that this is disadvantaging local farmers.