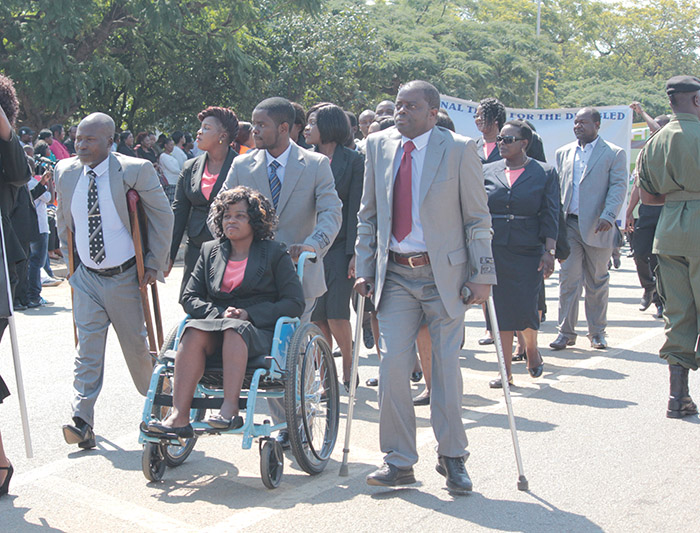 KAPALA CHISUNKA, Lusaka
A GROUP of physically challenged people has called on Minister of Community Development Emerine Kabanshi to institute investigations into the management of financial resources in the Zambia Agency for Persons with Disabilities (ZAPD).
The group of 15 physically challenged people from the countryâ€™s 10 provinces isaccusing ZAPD management of not prioritising issues affecting the disabled.
Group chairperson Rabi Maila alleged that the ZAPD management has been ignoring directives by them minister to address the issues affecting the group.
â€œWe came here nine months ago to look for funds from the agency so that we could start up businesses while some came to seek employment at the agency but all we get from the agency are stories. Ms Kabanshi has tried to intervene in the issue but her directives fall on deaf ears,â€ Mr Maila said.
He said despite the ZAPDâ€™s presence, most people living with disabilities have continued wallowing in poverty.
Mr Maila contends that the agency generates money from some of its property but wonders what this revenue is spent on.
â€œSome of us left our families in the villages because we wanted to source some money from the agency to help us. Others came to look for employment at the agency but none of our issues have been addressed.
â€œIs it fair that while we were asked to apply for employment at the agency, only able, bodied person, were picked for various positions while the rest of us were made to wait for next year?â€ Mr Maila asked.
But ZAPD acting director general Selo Brothertone said it is unfair for the group to claim that there has been misappropriation of funds by the agency management when they have all been beneficiaries.
â€œI have only been in office for two months. I was appointed in August 2015 and in my two months of office, nobody has been employed. But I am aware of the issues surrounding the 15 people who are now accusing ZAPD of mismanagement. And none of them can claim that they have not benefited from ZAPD this year,â€ Ms Brothertone said.
She said it is unfortunate that the group wants to be the only beneficiaries of the government empowerment funds when there are a lot of physically challenged persons in the country.