FORGET about what was initially sold on Black Friday. Primo Arts, which is usually associated with

visual arts, let more out of its artistic bag besides visual creative during the promotion of Black Friday side-walk
sale at Manda Hill Mall in Lusaka last weekend.
Other than spray painting performed by the founder of the group Joseph Mvula, the show included other creative activities such as music, poetry, dance and some magic.
The interesting façade about Joseph’s spray painting acts is that the artist usually leaves his audience guessing the outcome of the finished painting.
Although he normally paints the galaxy, the skies and landscapes when he is randomly throwing fumes of paint on canvas, it is difficult to figure out what the finished work would really be. One thing for sure is that every finished piece becomes a master piece of its kind.
Joseph has mastered his spray painting skill quite exceptionally; he is also rewarded with the rare ability to work in
front of an audience, something which most artists are not gifted with.
Away from visual art, Tom Chiponge aka Tom Sax, had a fair share of the limelight playing a saxophone blowing
some smoothing jazz to the delight of the audience and random shoppers and eaters across the tables who could be seen tapping their feet to the music. When Tom left the stage with a sizable audience clapping, the music tempo suddenly increased. At this point, Lupasha Chelah and Saubi Musonda stepped in the arena with energetic freestyle dance moves that received cheering.
And then there was a music performance by an up-and-coming artiste Izukanji. The music was punctuated by
some poetry and a magic performance by Shika Sokotela. It was actually just a plain illusive exploit with playing
cards and not real magic, but Primo Arts founder insists that he is trying to promote Shika’s “magic” skill.
In general, Primo Arts initiative to exhibit visual art alongside other creative disciplines somewhat unifies creativity
and promotes a diverse audience. In fact, the idea resonates well with the power of creativity which the venue is trying to promote in the build up to the Black Friday event.
Primo Arts innovation of showcasing visual art outside its conversational space fairly breaks the tradition of viewing art exclusively from the gallery.
And Modzi Arts, a creative hub located in Lusaka’s Ibex which is currently hosting a Germany artist Klaus
Hartmann as its artist-in-residence, is also participating in the FNB Art Joburg featuring the works of renowned local artist Stary Mwaba. (Artyak will discuss more on Klaus Hartmann’s artist-inresidence programme and Stary’s
participation in the FNB Art Joburg in the up-coming articles). 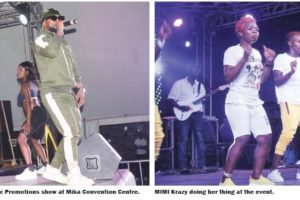