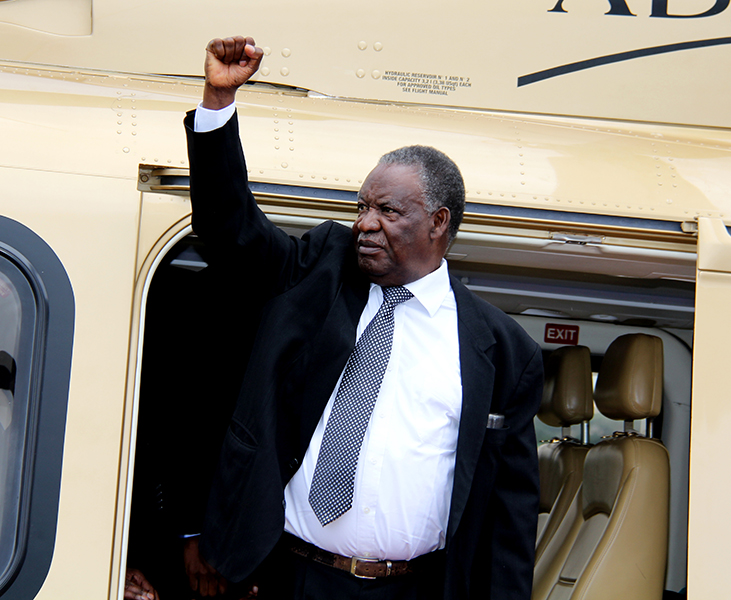 NANCY SIAME, Lusaka & NKOLE MULAMBIA, Ndola
FORMER Vice-President in the MMD government Lupando Mwape has described President Sata as a man who struggled for and envisioned an economically sustainable country through nationwide infrastructure development.
Mr Mwape said in his letter of condolences addressed to Acting President Guy Scott that these many developments will subsequently impact effectively on the economic well-being of the nation with the prospect of substantial poverty alleviation.
He said Mr Sata will be remembered as a rare, peerless and fearless political soldier whose political antics, manoeuvres and strategies eventually earned him the worthy eminence of President of Zambia.
â€œHe deservedly endeared himself with freedom fighters, vulnerable and disadvantaged people in this nation,â€ Mr Mwape said.
Mr Mwape said Mr Sata patriotically believed in the solidarity of Zambia and unqualified unity of all nationals.
And Democratic Republic of Congo (DRC) consular-general in Zambia Chantal Konji Maloba said late President Sata was determined to maintain peace and this peace must be maintained.
In her message of condolences to Zambia following the death of President Sata, Ms Maloba said she isÂ  also optimistic that trade relations between Zambia and the DRC will continue once a new leader is elected.
Ms Maloba said after signing in the book of condolence at Cabinet Office in Ndola yesterday that while it is sad that the country has lost a great leader, it is incumbent upon the people of Zambia to emulate him as he was determined to maintain peace.
And Chief Nsamba of Lunga district who described Mr Sataâ€™s death as shocking said the President was instrumental in fostering rural development, reports BILKE MULENGA and JACQUELINE CHIBWE.
Chief Nsamba said President Sata had a heart for the poor and marginalised in society.
He called on all Zambians to be calm, united and reflect on Mr Sataâ€™s good deeds.
US Agency for International Development (USAID) country director Susan Brems says President Sata has left a legacy that all will treasure for decades to come, reports STEVEN MVULA.
In her message of condolences, Dr Brems said Americans are mourning with Zambians.
â€œPresident Sata dedicated his life to the development of the people of Zambia,â€ she said
Meanwhile, permanent secretary in the Ministry of Information and Broadcasting Services Bert Mushala and his counterpart at Local Government and Housing Stanford Msichili on Wednesday took time to console mayor of Lusaka Mulenga Sata on the death of his father, President Sata.
Mr Sata is with hundreds of mourners and family members at Lusakaâ€™s Belvedere Lodge, which is the venue for mourning.
Several people have continued to pour out their grief on the death of President Sata.