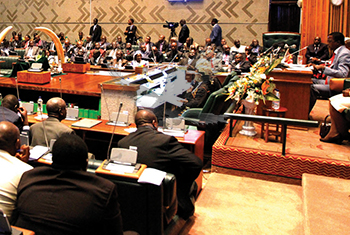 BUTTYSON KANDIMBA, Solwezi
THE North-Western Development Council of Elders (NWDCE) has described President Lunguâ€™s speech to the fifth session of the 11 National Assembly as exceptional and inspiring.
And the Zambia Union of Financial Institutions and Allied Workers (ZUFIAW) says the Presidentâ€™s speech has given hope to most Zambians.
NWDCE chairperson Lucas Chikoti said his organisation is happy with the policy pronouncements by the head of State, because they bring a new ray of hope.
â€œI think the address from His Excellency has been exceptionally good. I have listened to similar messages before, but they havenâ€™t been as good as what the President has delivered today,â€ Mr Chikoti said on Friday.
He said it was good that President Lungu reiterated Governmentâ€™s commitment to addressing youth unemployment, and also expressed commitment to the constitution making process.
Mr Chikoti said the NWDCE supports the piecemeal amendment of the constitution by taking the non-contentious issues to Parliament. He said it is will be economically imprudent to hold a national referendum due to limited resources.
â€œLooking at our finances, it would have been very difficult to hold a referendum and we are comfortable with the piecemeal enactment of the constitution,â€ he said.
He also commended President Lungu for re-aligning some ministries to improve efficiency, noting that some ministries were too big to be managed by one person.
â€œI am sure some ministers were finding it very difficult to run the ministries, but now with the breakdown that has been done, the ministries will be manageable,â€ he said.
Mr Chikoti also praised the government for the introduction of co-operative unions to help run the solar powered milling plants under the presidential initiative, saying this will help create jobs.
He said the co-operative unions will also assist Government in buying maize from farmers, so that the Food Reserve Agency (FRA) could only concentrate on stocking up strategic food reserves.
Meanwhile, ZUFIAW president Ackim Mweemba said the presidential speech was positive and inspiring, especially that it emphasised on economic diversification, labour reforms to end casualisation and national unity, NKOLE MULAMBIA reports in Ndola.
â€œThe President gave us hope as citizens of the country, particularly where he started with the issue of national reconciliation, prayer and fasting. Any nation that gives itself to the hand of God is destined for greater things, and we urge all Zambians to rise to the occasion on that day,â€ Mr Mweemba said.
He said the call to national prayers is in tandem with 2 Chronicles 7: 14 which reads: â€œIf my people, who are called by my name, will humble themselves and pray, and seek my face, and turn from their wicked ways, then I will hear from heaven, and I will forgive their sin and will heal their land.â€
â€œSo this is timely, and am urging all Zambians to rise to the occasion,â€ Mr Mweemba said.
He further said it is true that diversification is key to stimulating economic growth.
Mr Mweemba said the splitting of the Ministry of Agriculture into two is a step in the right direction which will allow for proper allocation of funds.