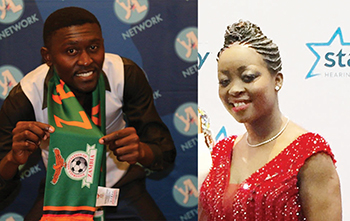 KELVIN KACHINGWE, Lusaka
AUTRALIA-based Zambian musician Portia Clark says she is embarrassed by B-Flowâ€™s letter to top-selling American singer-songwriter and actress Taylor Swift regarding her video Wildest Dreams.
Taylor Swiftâ€™s latest music video Wildest Dreams, which was revealed recently at the MTV Video Music Awards coverage, has been battered by critics who claim it is racist and pandering to rich white fantasies from a colonial era.
The video has a mainly white cast and revolves around two 1950s era movie stars – played by Swift and Gran Torino actor Scott Eastwood – filming in Africa.
B-Flow had written to Taylor Swift, who this year became the youngest woman ever to be included on Forbesâ€™ 100 Most Powerful Women list, praising some aspects of her video and also offering suggestions on how she could have tackled it.
â€œI write to thank you for your new video for Wildest Dreams. The first time I saw it, I thought of my late grandma, and how she would have reacted to it. Like me, I think she would have loved it because she was proudly African,â€ he wrote.
He then said he understands why she has been catching a lot of fire with the video.
â€œBefore I proceed, I should clarify that I can understand why some people are seeing your video as glorifying colonialism. After all, the characters in your video do not appear so different from Cecil Rhodes and his British South Africa Company (BASC) counterparts, the colonial masters who scrambled for our minerals and land.â€
But Portia, who was recently in the country, and performed alongside Dr Dreâ€™s son Curtis Young at Smugglers Inn in Lusaka, is not impressed with B-Flowâ€™s actions.
â€œI feel really ashamed calling myself a Zambian musician when there is a â€˜Zambian Musicianâ€™ that has recently been posted abroad representing Zambia and writing to one of the biggest and talented pop singers in the world criticising her latest music video, as if she will even take the time to read the useless letter,â€ she wrote on her Facebook page.
â€œI truly believe you learn from those doing it better than you and not criticise them, who in Africa let alone Zambia has been as successful as Taylor Swift?
â€œI was just with Taylorâ€™s manager Scott Borchetta, the director to one of the most successful labels, and he will not even glance his eye over this stupid letter, please donâ€™t fool your fans to believe that you are actually doing anything sensible and will make any impact. If you want to do something, then get to work and make it in your own music career.
â€œBy the way, your letter was more racist than Taylor not having African people or as you put it blacks in her video. By the way, we are not Black. We are all One, now stop criticising the best in the business and go and do something sensible with your time.â€