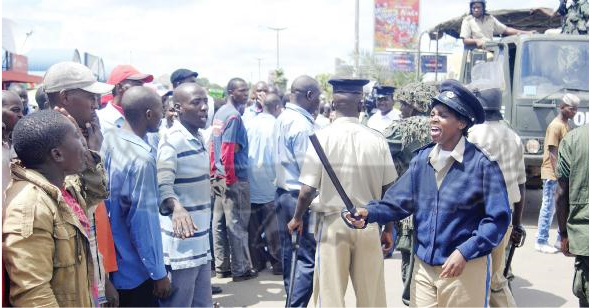 Early this year, our political leaders pledged to end political violence that has characterised the campaigns. We all hailed this as a move in the right direction.
But a few months down the line, the violence continued, leading to the Electoral Commission of Zambia ( ECZ) to suspend campaigns in Lusaka and Namwala districts.
During the suspension, the Commission observed that there has been a marked decrease in cases of political violence.
Like we have said before, violence cannot win an election. It is the message candidates bring to the electorate.
The electorate will be convinced to vote for a candidate who offers solutions to the challenges they are facing.
On a daily basis, voters face challenges such as lack of access to health facilities, lack of educational facilities like schools, poor roads to markets or other places, thus hampering communication.
When politicians are addressing voters, it is the solutions to such challenges that voters want to hear. Violence only mars a political process like a campaign.
Any resort to violence is a failure to face issues. It is like a man who fails to reason and the only way he can solve matters is by fighting. A campaign like this becomes unreasonable.
It boggles oneâ€™s mind as to why political campaigns should be a matter of life and death. At the end of the day, we all belong to mother Zambia, our land, our heritage.
Let us remember that elections will not outlive our country. They are only for this period and thereafter, we are back to our business. We each have a responsibility to guard peace.
Clean campaigns are devoid of violence and that is what all Zambians want to see. This is why ECZ took a stern measure to suspend campaigns in the two districts. The Commission just had to come in because political leaders did little to stem the violence.
On Friday, at a meeting of political party presidents, ECZ chairperson Essau Chulu noted that though there has been an improvement, much needs to be done.
We cannot agree more with him. In the first place, like we have said , the resolve to end political violence rests with leaders of political parties.
They have the powerful voice to bring about sanity, order and peace so that we have peaceful campaigns. The fact that they are in the lead means their word is law. They just issue orders and all rank and file abide, without question.
It is disappointing to hear that despite the suspension of the campaigns, some political parties did not comply with the directive as some branded vehicles were seen in political party colours on some streets.
We cannot say more. We still point a finger against the political party leaders. They carry the heavy responsibility of keeping their cadres under political party sway.
At the same time, the police may also have not helped the situation. As the ECZ issued the suspension and other accompanying orders, it was the policeâ€™s responsibility to ensure that orders were complied with in line with the Electoral Code of Conduct.
One would expect that the police move in at any sight abrogation of the orders so that we should not have seen any branded vehicles around.
We hope the police can do better in the remaining few days of the suspension so that there is total compliance of the orders.
While all these measures are being taken, we expect everyone to be on the same side because it is peace we are after.
We are disappointed that some leaders refused to sign the Electoral Commission of Zambia Peace Accord.
While we commend those who appended their signatures to the document, we urge those who have not done so to quickly sign as a way of committing to ensurie that we have peaceful campaigns.

Coronavirus fight: We relax, we perish