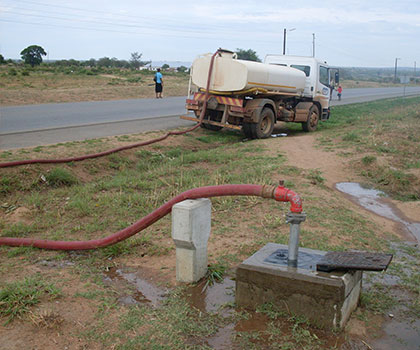 CHALI MULENGA, Livingstone
THE Zambia Police Service owes the Southern Water and Sewerage Company (SWASCO) K1.5 million in unpaid water bills.
SWASCO managing director Charles Shindaile said the Police Service has over a period of time defaulted in settling the arrears.
Mr Shindaile said in an interview that the water utility company has in the past tried to engage the police command over the matter but that the latter issued a promissory note which is yet to be fulfilled.
Mr Shindaile said three letters were sent to the police command but no favourable response has been received.
â€œWe have been very tolerant with the police because since last year, they have never paid us anything. We are not trying to punish them, we have a duty to provide a service and this requires finances,â€ he said.
Mr Shindaile said the water utility company has incurred losses due to the non-payment of bills by some consumers.
He explained that the water connections in the police camp have not been separated as the exercise requires K300,000.
Mr Shindaile said SWASCO is ready to separate the water connection lines once funds are available.
Mr Shindaile said members of the public should appreciate that despite water being a natural resource, the cost of generating it is expensive.
â€œIt is always the case in Zambia; people think that water is free. Each time we ask the police to pay the bills, they say they have not received funding,â€ he said.