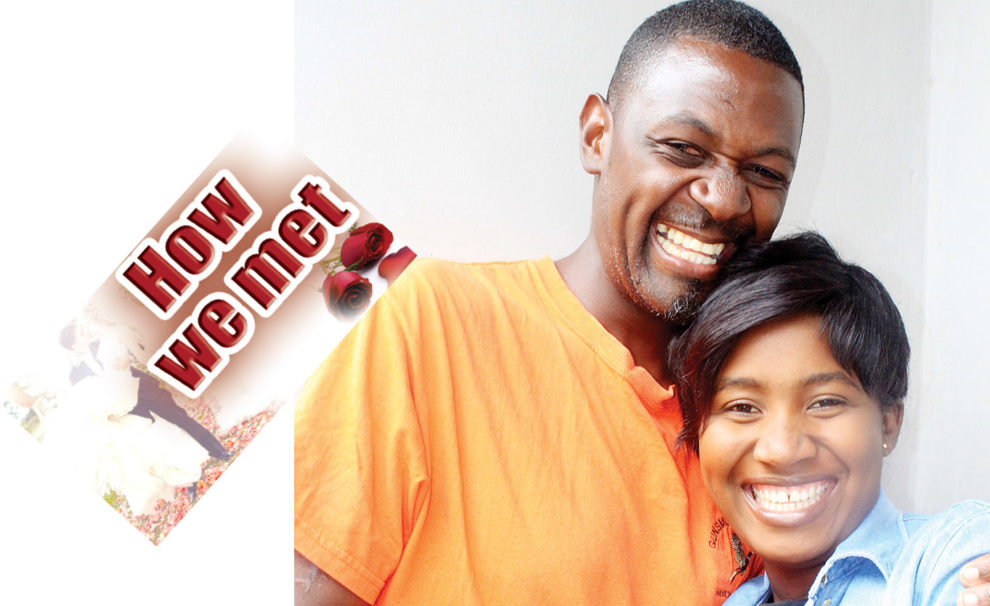 How we met:
MIKE MUGALA, Lusaka
THREE years down the line, Boniface Kabongola aka DJ Slam of Hone FM radio vividly remembers how his now wife Eneles Phiri refused to give him her phone number the first time the two met.

Eneles refused to give her phone number because she thought he was not the kind of man she would go out with.
“I refused to give him my phone number because I did not like him, there was nothing that attracted me to him, so I thought it was not necessary,” she says. ‘He told me he wanted to marry me but I did not take him seriously, when he gave me a paper on which he wrote his number, I threw it away.”
The two met in April 2014, when Boniface went to buy water in a shop were Eneles was the shopkeeper.
“Upon setting my eyes on her, I was attracted because of her smile,” he says. “I started thinking to myself ‘I will be happy to make this lady my girlfriend’ but she was playing hard to get, so I left my phone number and expected her to call me.”
Eneles sent a WhatsApp message to Boniface a week later and this marked the start of their friendship.
“He had earlier passed through the shop and did not stop by, I thought he was upset because I refused to give him my number,” she says. ‘But as I was sweeping the next morning, I found the paper on which he had written his number and I later sent him a text.”
But Boniface did not realise it was Eneles who sent him a WhatsApp message until he looked at her picture.
“I asked her out and we later went for lunch at Nando’s on Cairo Road. We rarely communicated because I was writing my exams, we only started communicating regularly when I finished my exams and we later got attracted to each other,” he says.
Though the two got close to each, Eneles never thought their relationship would culminate into marriage.
“I did not like him at first, but I always wondered how I always found myself with him,” she says. ‘I was a church girl, people were telling me to find a man and marry within the church. People also told me that he was not a good guy for me because he used to drink beer, but I ignored what they told me and could to visit him every Sunday.”
With time, Boniface got convinced that Eneles would make a good life partner for him.
Eneles agrees.
“I usually told him to stop drinking beer and with time he began to slow down,” she says. “I began to like him and even started seeing hope in our relationship. I used to pray for him to stop drinking beer.”
In September 2014, Boniface visited Enele’s parents to make his intention of marrying her known and the pair got married the following month.
“I became convinced to marry Eneles because she cares for me like my mother used to, she advises me against indulging in negatives vices,” he says.
Eneles was very happy when Boniface proposed marriage although she did not take him seriously.
“I thought he was joking because he told me he wanted to marry me even the first time we met,’ she says. ‘And when I told my mother I was getting married to a DJ, she was against the idea until I convinced her that I love him.”
Boniface’s three years in marriage has taught him that respect, communication and understanding should be the bedrock of any marriage.
Eneles shares the same thought.
“There should be honesty, respect and trust in a marriage,” she says. ‘A woman must respect her husband regardless of her social status, a man will always be the head of the house.”
Boniface is of the view that people in marriage must work out their misunderstandings within the confines of their home and involve a third party.
He has also noted that infidelity in marriages has greatly contributed to spouse killings and violence.
Eneles says she does not feel jealous when a woman calls her husband whenever he is on radio.
“ I used to switch of the radio whenever a w o m a n called during the course of our relationship, but I no longer do that because I have come to know him more,” she says.
For Boniface, he is a deejay on radio and a husband and father when he is at home.
“Radio is work and I make sure I don’t mix it with my family life,” he says. “I always disclose my marital status to avoid a trap from women fans. I’m DJ Slam on radio and Boniface at home.”
Eneles has observed that desperation on the part of young girls has greatly contributed to the influx of early pregnancies.
“A real man must not ask for sex from a woman as a way of showing him that she loves him,” she says. “I therefore urge young ladies to take their time and be patient if they want to have a good husband.”
And Boniface has noted that loss of cultural values has greatly contributed to the break-up of most marriages.
“People take whatever they see on social media into their homes,” he says. “It’s like we have lost our identity and have forgotten where we are coming from.” The couple has one child.

Journalism is her calling
Feeling magical with witchdoctor’s leaflet