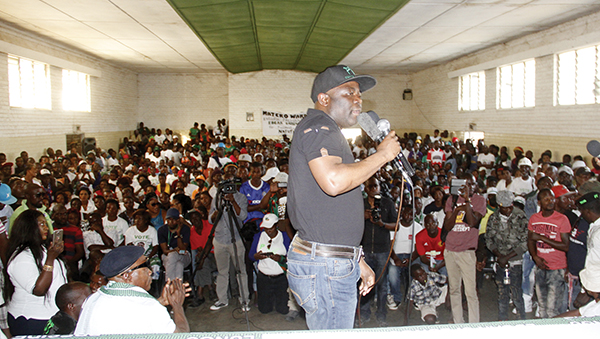 HONE SIAME, Lusaka
THE youth and security sub-committee of the Patriotic Front (PF) has advised senior members harbouring ambitions to take over the presidency of the ruling party to tame their “insatiable appetite” for power and support President Lungu ahead of the 2021 presidential and general elections.

And the PF youth and security wing has warned that it will do everything in its legal power to protect the party from “political vultures and scavengers” within and outside.
This is according to a statement released by PF media director Sunday Chanda in Lusaka yesterday.
National chairperson for youth and security Stephen Kampyongo said yesterday that senior party members who have mounted sustained anti-PF propaganda and distortions over President Lungu’s eligibility to contest the 2021 elections will not go unchallenged.
“We are not short-circuiting democracy when we assert that there is the unwritten rule that an incumbent should not be challenged,” he said.
He dispelled reported assertions by PF Roan member of Parliament Chishimba Kambwili that the position the party leadership has taken to rally behind President Lungu amounts to a political short cut.
Mr Kampyongo said the ruling party’s structures have resolved to rally behind President Lungu as its candidate.
He said therefore, the PF will take President Lungu to the people across Zambia as its candidate for being their faithful and loyal servant.
Mr Kampyongo said President Lungu has proved that he can unite the party going by the way he managed the transition in the aftermath of the death of then President Michael Sata in 2014.
He said the position the PF has taken is not peculiar to Zambia but a common practice in advanced democracies such as the United States,” Mr Kampyongo said.
“Senior members of the party understand established channels of communication, but a handful have elected to play to the gallery as darlings of hostile media whose authenticity and credibility is difficult to prove.
“Let me warn them that the party will not entertain the pain they got us through when they rallied behind Guy Scott. The national youth wing of the PF shall do everything to protect the party from political vultures and scavengers within and outside,” Mr Kampyongo said.
He said the party is focused on delivering on its promises to Zambians.
Mr Kambwili was quoted in a tabloid as opposing the announcement by PF secretary-general at the weekend that President Lungu is the ruling party’s sole candidate for the 2021 elections.
Meanwhile, the PF says there are no political prisoners and human rights abuses in Zambia and that the nation is at peace.
The ruling party has also maintained that it will not dialogue with any party that does not recognise the country’s duly elected head of State, President Lungu
Deputy spokesperson Frank Bwalya said Zambia is moving forward and making progress in all sections of the economy and social life contrary to some people’s contention that the country is stagnant.