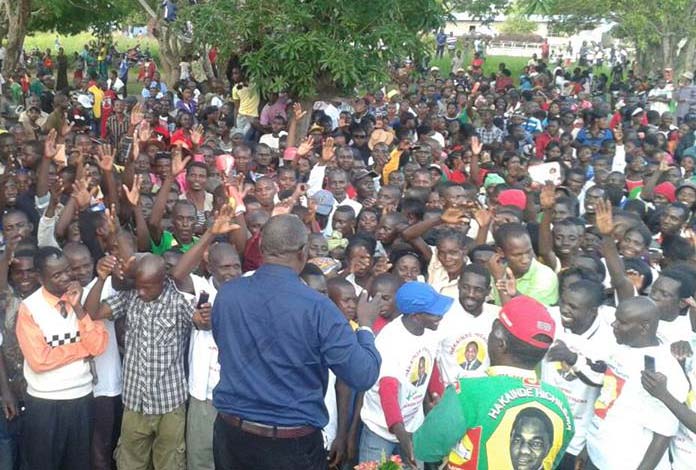 JIMMY CHIBUYE,Lusaka & MAPALO LUPUPA, Shiwangâ€™andu
PATRIOTIC Front (PF) and United Party for National Development (UPND) supporters yesterday clashed in Shiwangâ€™andu forcing the police to fire teargas to disperse them.
Both Muchinga Province Deputy Commissioner of Police Bonny Kapeso and UPND campaign manager Dipak Patel confirmed the incident separately yesterday.
The fracas resulted in the cancellation of the planned UPND rally which was supposed to be addressed by national chairperson Mutale Nalumango, together with parliamentarians Felix Mutati, Geoffrey Mwamba and Patrick Mucheleka, and former first lady Maureen Mwanawasa.
Mr Mutati is MMD Lunte member of Parliament (MP), Mr Mwamba is PF Kasama Central MP and Mr Mucheleka is an independent lawmaker for Lubansenshi.
Mr Kapeso said â€œThe information I have is that the two political factions clashed at a place which was earmarked for the UPND rally. The police however, quickly moved in and used teargas to separate the two factions.â€
But Mr Patel in a statement issued yesterday alleged that PF cadres attacked the UPND campaign team in order to prevent its planned rally from taking off.
â€œWe are deeply concerned and horrified to hear of an attack on our campaign team as they were flying on their way to a rally in Shiwangâ€™andu,â€ Mr Patel said.
He alleged that the helicopter carrying Ms Nalumango, Mrs Mwanawasa, Mr Mutati, Mr Mwamba and Mr Mucheleka was attacked upon arrival by the PF supporters who used stones to prevent the meeting from taking place.
â€œUpon arrival, PF cadres launched an attack on the helicopter and campaign team, in an attempt to prevent them from undertaking their right to campaign and hold meetings,â€ Mr Patel said.
He called on acting President Guy Scott and Shiwangâ€™andu MP Stephen Kampyongo, who is also Deputy Minister of Home Affairs, to strongly condemn the incident.
Mr Patel urged the PF to work with the UPND to ensure such acts are not repeated and bring the culprits to book.
And Mr Kampyongo refuted allegations that he directed the PF supporters to attack the UPND campaign team, saying the opposition partyâ€™s decision to travel to Muchinga at this point is provocative because PF president Edgar Lungu is expected to hold rallies in the area this weekend.
â€œI am disappointed with the UPND campaigns. We allowed them to campaign in Muchinga when we were debating the budget but why should they decide to comeback now when they know we are hosting our presidential candidate this weekend. This is very provocative,â€ he said.
Mr Kampyongo said the UPND have campaigned in Muchinga before without disturbance, adding that the PF has a responsibility to campaign peacefully.