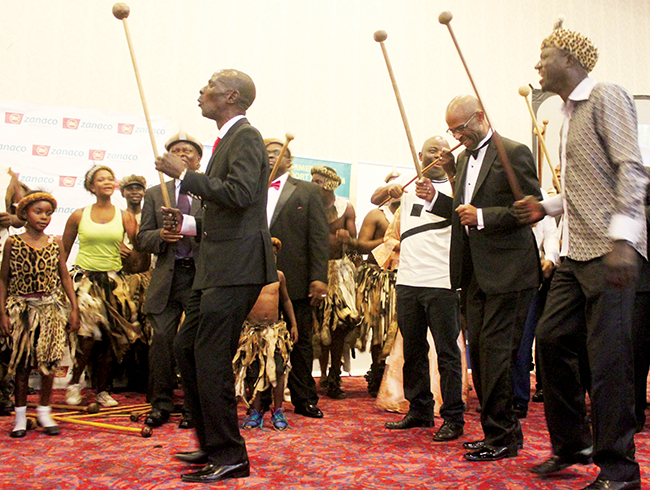 KELVIN KACHINGWE & KELVIN CHONGO, Lusaka
MINISTER of Finance Alexander Chikwanda says since the Patriotic Front (PF) formed government in 2011, it has worked to restore the dignity of traditional leaders.
And Paramount Chief Mpezeni of the Ngoni-speaking people of Eastern Province has commended Government for the various development projects that are under-way country-wide.
Speaking at the Nâ€™cwala cultural night and dinner dance on Friday at Government Complex in Lusaka, Mr Chikwanda said that in the past, traditional leaders did not receive due recognition.
â€œPF, under the leadership of presidents Sata and Lungu, has restored the dignity of chiefs. You donâ€™t see chiefs going to the airportâ€¦,â€ he said at the event, which was spiced by typical Ngoni tradition.
The guests at the event were in an exuberant mood, perhaps best epitomised by National Sports Council of Zambia (NSCZ) chairperson Mwamba Kalenga, who joined musician Angela Nyirenda on stage and attempted to outdo her dancing.
But he was not the only one as PF deputy secretary general Mumbi Phiri did, too, while Finance deputy minister Christopher Mvunga was not far, although for him, he opted to join the Ngoni warriors on stage, where he managed to drag along Chief Mpezeni, his first cousin.
He promised a spin dance at the Nâ€™cwala.
In his short speech, in which he talked about the great root of the Ngoni people and the special relationship that exists between the Ngonis and Bembas, Mr Chikwanda called for support to traditional initiatives like Nâ€™cwala, saying they help in uniting the country.
â€œWe [Bembas] have built a cousinship which is unique although other tribes in Eastern Province have come to regard us as their brothers. But the cousinship is only with the Ngonis and Tumbukas,â€ Mr Chikwanda said.
He said the Ngoni are remarkable people with a rich history on the African continent.
â€œThe Nâ€™cwala is significant. It is a ceremony for the great people of Kwa Zulu, Natal, descendants of Shaka Zulu, who was one of the most influential leaders. The Ngonis settled in the mountains after moving from Kwa Zulu. But there is no water where they settled; most of the lakes are located in our area,â€ he said as he played the usual cousinship banter.
And Paramount Chief Mpezeni praised Government for constructing and rehabilitating roads, health facilities and schools in all parts of the country.
He said road infrastructure is the driving force toward economic development because they connect productive areas to markets.
â€œI would like to thank Government for the development projects it has given us, it has given a lot to the people than any previous Government,â€ he said.
The event saw various individuals and institutions honoured for their contribution in promoting the Ngoni culture.
Those honoured included corporate executive Amon Jere, late politician and diplomat Amock Phiri, late corporate chief executive David Phiri, late Foreign Affairs minister Siteke Mwale and Indo-Zambia Bank.
Various individuals and institutions pledged their financial assistance towards the holding of this yearâ€™s ceremony, which is set to take place at the end of next month.
Among those who made pledges were the PF (K20,000), Zesco Limited (K50,000), Stanbic Bank (K50,000) and Indo-Zambia (K10,000).
â€œApart from UNIP, weâ€™re the only political party with our very own building. So, on Wednesday, come to the secretariat and collect K20,000,â€ Ms Phiri said in announcing the pledge on behalf of the ruling party.
Coerced into making a pledge, Mr Chikwanda, who was the guest-of-honour, said as Finance Minister, he is ethically not allowed to do so but he will make a significant contribution.
Minister of Local Government and Housing Stephen Kampyongo, jocularly, said January being the month for schools, he was unable to pledge much. But in appreciation of his wife, who is from Eastern Province, he pledged K2,000.