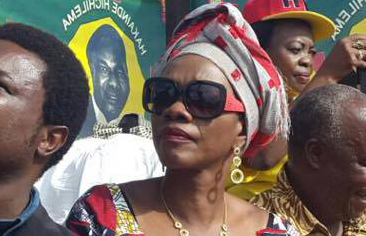 LINDA NYONDO, Lusaka
THE Patriotic Front (PF) in Chongwe has called on its member of Parliament Sylvia Masebo to resign from the party.
PF Chongwe constituency chairperson Oliver Kachepa said in a statement released in Lusaka, said it is sad that Ms Masebo is allegedly bringing the name of President Lungu and the party into ridicule.
Mr Kachepa was reacting to a newspaper article in which Ms Masebo is quoted ridiculing the PF.
â€œWhat interest does Masebo have in certain officers to complain when people are transferred? Itâ€™s a pity that Masebo does not understand that transfers are done in various institutions and not by cadres,â€™â€™ he said.
Mr Kachepa alleged that Masebo is a bitter woman that President Lungu who she campaigned against in the run up to January 20 presidential elections is now President of Zambia.
He advised Ms Masebo to concentrate on developmental matters and not petty issues.
Mr Kachepa said the Chongwe law-maker needs to address the challenges which people in her constituency are facing such as water problems, bad roads that need to be tarred, and construction of a modern market which has stalled.