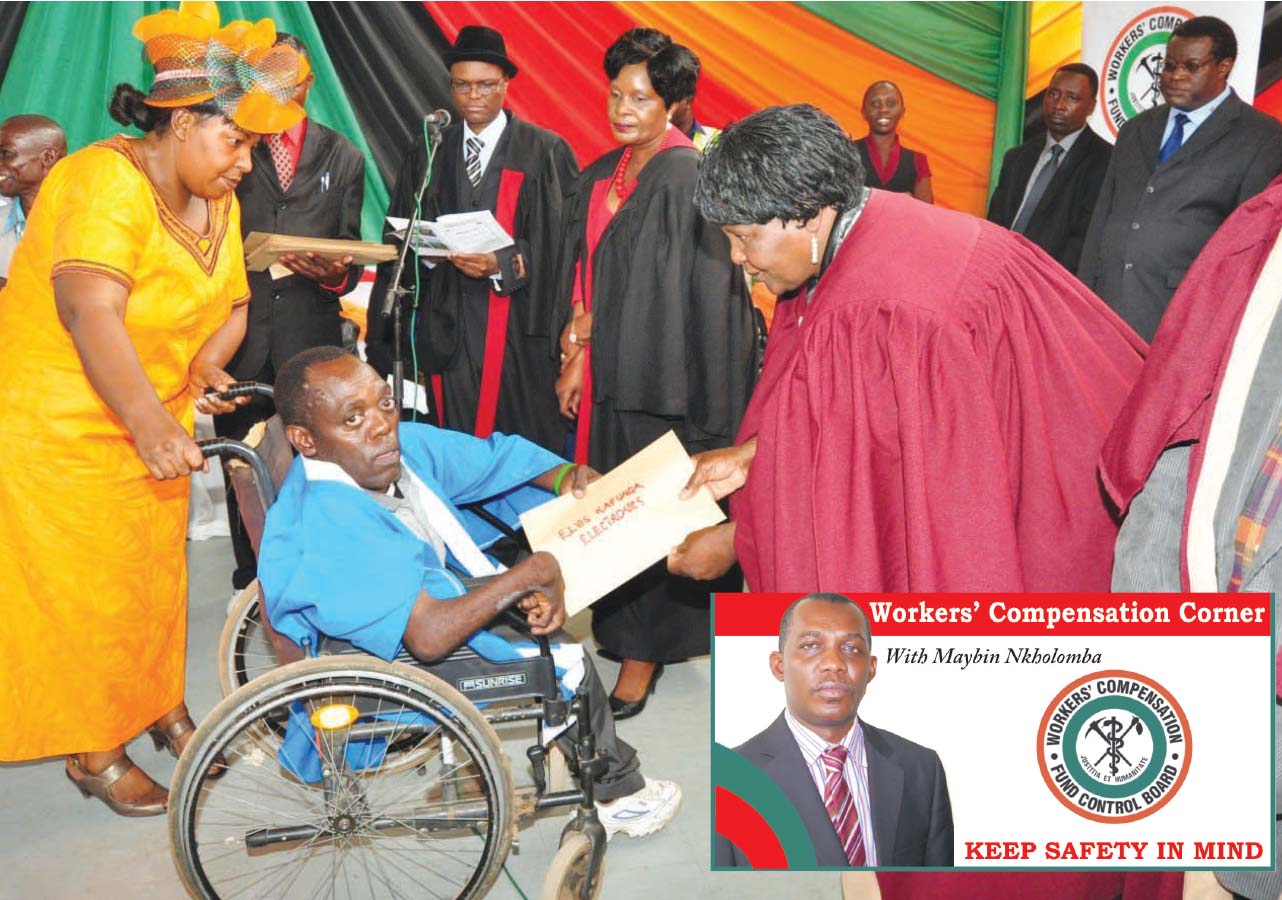 ONE of the graduating students receiving a certificate from NVRC officials

WORKERS’ COMPENSATION CORNER with MAYBIN NKHOLOMBA
THE story about the Workersâ€™ Compensation Fund Control Board (WCFCB) return to work programme for injured workers cannot be told better than to bring out detail on the recent graduation ceremony held at the National Vocational Rehabilitation Centre (NVRC) in Ndola.
After some two years of studying under the sponsorship of WCFCB, 10 out of 13 permanently disabled pensioners joined other graduating students at NVRC last week.
NVRC, which was originally part of WCFCB structures, has been providing various courses to many of our pensioners, as it does to other students from all sections of society, over a long period of time now.
The 10 form part of a group of many pensioners sponsored to undertake courses at various tertiary institutions of learning in the country, with a view to equipping them with alternative skills for re-entry into the job market, under the return to work strategy.
Our rehabilitation counselor Rodgers Chishimba told the author that WCFCB spent in excess of K300,000 to sponsor the 10 pensioners to pursue courses in general agriculture, metal fabrication and electronics. Two other pensioners could not succeed with the ZICA accounting programme while one died before completion of the course.
Going forward, the graduates will be encouraged to search for job opportunities and where searching fails to yield, WCFCB will provide commutations of monthly pensions for the pensioners to venture into micro business undertakings.
Suffice it to state that return to work progrmmes are critically important to the recovery of lost earning capacities of injured workers and if properly implemented, more value can be derived from the workersâ€™ compensation system.
The focus is to return injured workers to employment for them to continue earning steady income, and supporting their families more than sustaining them on monthly pensions, which in most cases are not equal to lost earnings.
Elsewhere around the globe, we are told return-to-work strategies and programmes for workers injured on duty, have traditionally been used to reduce workersâ€™ compensation costs. They are also known to have been used to improve productivity and morale across an organisation; they can save organisationsâ€™ time and money and they can protect agencies from loss of talent.
We are further educated that examples of effective return-to-work strategies include offering the opportunity to injured workers to work part-time, telecommuting, modifying work duties, modifying schedules, and implementing reasonable accommodations to provide employees with the tools and resources they need to carry out their responsibilities. Ultimately, effective return-to-work strategies and programmes allow injured employees to protect their earning power while at the same time boosting the organisationâ€™s productivity. Furthermore, the ability to return to work after injury or illness plays an important role in the employeeâ€™s actual recovery process.
Here in Zambia, return-to-work strategies are not used to reduce workersâ€™ compensation costs per se, they are used to return injured workers to employment, and in all cases with another employer or self-employment where job opportunities do not arise in the public or private sector organisations.
Our employers in Zambia are known to separate with workers at the point of workplace injuries that lead to permanent disabilities. The phrase â€˜medical dischargeâ€™ is not uncommon especially in the mining sector.
As many will agree with us, unemployment, especially for people with disabilities, is the chief driver of poverty and destitution but thanks to a panacea found in the workersâ€™ compensation policy of return to work. Many workers injured in the course of duty have successfully been returned to employment. And unlike in other countries where when an injured worker is returned to employment, they are also removed from the workersâ€™ compensation system, in our country, they continue to receive workersâ€™ compensation benefits until death.

How to ensure safe grain storage