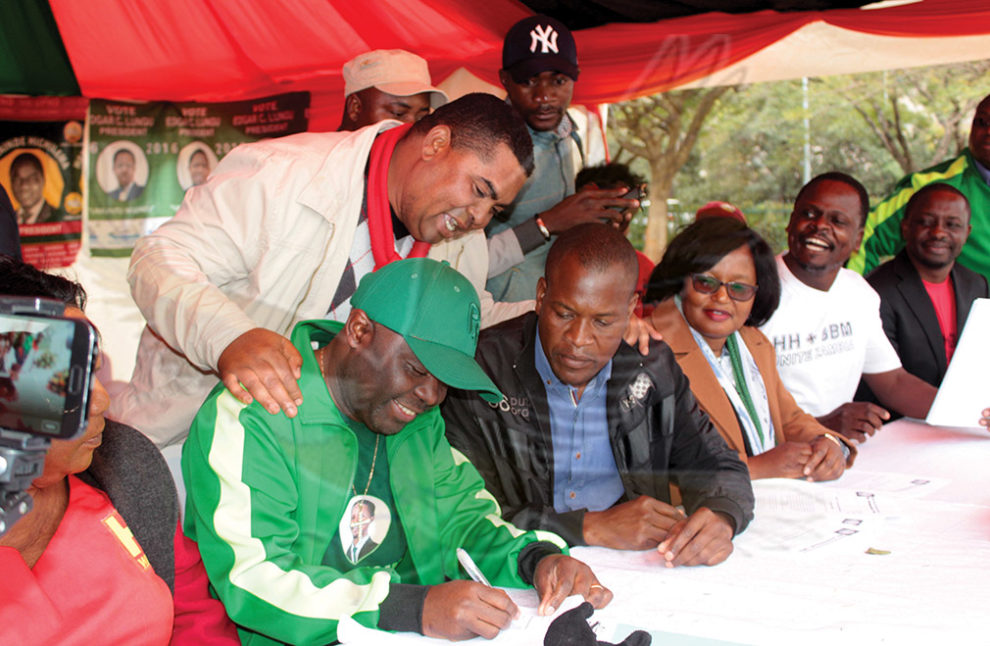 THE Patriotic Front (PF) and United Party for National Development (UPND) yesterday signed an agreement to end political violence.This is indeed commendable as it signals the willingness of the two major political parties to end violence and co-exist.
In the recent past, Zambia has experienced a rise in political violence perpetuated by mostly cadres from the two major political parties.
This violence has been more pronounced during political campaigns and polls with the latest skirmishes experienced last weekend as local government elections draw near.
It is, however, encouraging that the two political parties, who were perceived unable to see eye-to-eye, can sit on one table to pledge their commitment to ending violence.
This comes a month after President Edgar Lungu and opposition leader Hakainde Hichilema set a rare tone of peace and reconciliation at the funeral of veteran politician Daniel Munkombwe, where they shook hands and chatted.
It was also heart-warming to see the PF youth and security chairman Stephen Kampyongo, and UPND deputy youth chairman Munji Habeenzu append their signatures to the “peace pact”, which is a clear demonstration of their love for the country and commitment to peace.
The agreement which was brokered by the Electoral Commission of Zambia (ECZ) was witnessed among others by UPND deputy secretary general Patrick Mucheleka, spokesperson Charles Kakoma and from the PF, Kelvin Sampa, the Kasama MP, and Sunday Chanda, the party’s media director.
During the signing ceremony, the political parties pledged to implement several measures in a bid to end violence.
“We, in the UPND, are committed to holding peaceful elections and embark on massive campaigns to end violence. We shall disarm our cadres and they shall no longer move with guns, pangas or any other offensive weapons.
“Our [UPND] youths shall not wear masks or military fatigues but will freely wear party t-shirts. We shall exercise high levels of tolerance and we shall refrain from hate speech and focus on issue-based campaigns,” Mr Habeenzu said.
This is certainly what every peace-loving Zambian would want to hear from our politicians.
The message from the PF was not any different as Mr Kampyongo pledged the ruling party’s commitment to uphold the resolutions of the peace pact.
“We, the PF youth league, stand opposed to violence. We are one people and violence is criminality. There is no justification for violence. President Edgar Lungu has clearly stated that no one should be shielded for committing violence under the guise of a political party,” Mr Kampyongo said.
Mr Kampyongo said by signing the peace pact, the youths in PF and UPND have opened a new page of embracing peace and tolerance.
Indeed Zambians are looking forward to a new political dispensation where politicians, irrespective of their ideological differences, will find common ground for co-existence.
With the signing of the pact we expect the message of peace to trickle down to the lower rungs and the cadres in particular because this is where violence ensues.
It is also hoped that yesterday’s meeting will not be a one-off, but political parties will from time to time engage in a bid to nurture cordial relations.
It is commendable that the PF have invited their UPND counterparts to visit at the secretariat. This is how it ought to be.
Other parties should not be left out but join in the revelry.
As rightly noted by Mr Kampyongo, we are optimistic that the peace pact is the beginning of better things to come.

Africa must sit up
No chance for failures