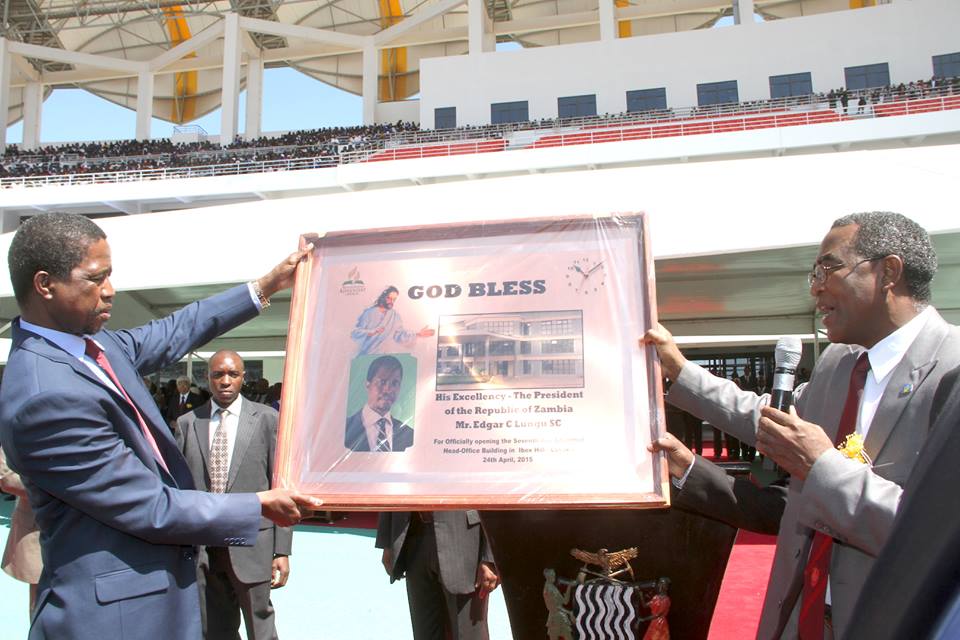 TEDDY KUYELA, Lusaka
PRESIDENT Lungu has advised the Church in Zambia not to be confrontational with Government on governance issues as the two are co-operating partners in national development.
Mr Lungu said Government and the Church must always work together in improving the living standards of people as well as fostering development.
He said this yesterday at National Heroes Stadium in Lusaka, where he officiated at the Seventh-Day Adventist Church celebrations marking the attainment of the churchâ€™s one million membership.
â€œThe Church must continue to partner with Government so that development can be attained in the country.
Government appreciates the role of the Church in bringing development in the country. I am also happy that the Church has continued to partner with Government in matters pertaining to health and education,â€ President Lungu said.
Mr Lungu said the church has done well in taking care of the people as seen by the provision of secondary schools, Rusangu University and mission hospitals.
President Lungu also said the Church should continue to pray for Zambiaâ€™s peace, unity and love.
He said the PF, as a governing party, cherishes the partnership between Government and the Church adding that citizens should, therefore, pledge to honour God by adhering to the Christian virtues upon which Zambia is founded.
President Lungu reaffirmed that Zambia will remain a Christian nation tolerant of other religions and urged all Zambians to seek God so that He can continue to bless the nation.
He implored Zambians to spread love and not hatred, retribution or insults by tolerating each other regardless of peopleâ€™s different persuasions.
President Lungu believes that it is possible for all citizens to create a more just and caring society united in peaceful commerce, politics, religion and other spheres of life.
Mr Lungu said this, however, is only possible when love and not hate rules.
He said the Churchâ€™s spiritual guidance should continue to move the country forward.
Seventh-Day Adventist Church president Harrington Akombwa said in a sermon that President Lunguâ€™s Government of inclusiveness is encouraging and should be supported by all well-meaning citizens.
Reverend Akombwa said Zambia is a blessed country and citizens should continue to embrace peace, unity and love.
President Lungu was accompanied by his wife Esther, Cabinet ministers and other senior government officials.
UPND president Hakainde Hichilema, FDD president Edith Nawakwi and former first lady Maureen Mwanawasa attended the service.
Before the church service, President Lungu inspected a guard of honour mounted by the path-finders of the Seventh Day Adventists.
And in his appeal for continued cooperation, President Sata said the PF was a working and listening government which was ready to cooperate with the church and will create an enabling political, social and economic environment necessary to prosper human integral development.
He said the government will ensure that the freedoms enshrined in the bill of rights were enhanced and also protect and safeguard other types of freedoms required to lead a dignified and meaningful human life.
Mr Sata said the church and government have the same constituency and the roles were clear that the church provides the spiritual while Government provides physical aspects of human development.
He advised that the church and government should not appear to be fighting because when two elephants were fighting, it was the grass that suffers.
The Head of State said the church and government should avoid confrontational approach to each other and that when government goes wrong, the church should correct the situation by offering alternatives.
He emphasized that the PF was a listening government and any suggestions on issues of governance would be treated with due consideration.
He said whatever development projects that government was doing for Luapula province, it was also for the benefit of the Diocese of Mansa because the boundaries of the Diocese and the political boundaries of the Province were the same.
Mr Sata has since called for the church and government to unite and work together for the benefit of the people.
And Zambia Episcopal Conference President (ZEC) Ignatius Chama said the Conference has heard through the Press that Government was willing to dialogue with the Church over matters of concern that were raised during the Press conference of January 23, 2014 in Lusaka.
Father Chama said his conference was more than ready to meet government as soon as possible to discuss the issues raised during the conference and others issues of national interest. He added that the conference strongly believed that it was only through genuine dialogue that critical issues affecting the nation could be resolved amicably. Speaking at the same function, Bishop Emeritus of Mansa, Aaron Chisha advised government not to let the price of mealie meal go beyond the reach and affordability of the majority Zambian poor because it was a staple food which government should ensure was accessible and affordable by all. Bishop Chisha called for moral consideration for people responsible for fixing prices not to price mealie meal out of reach as majority Zambians especially children and the poor depend on it more than the rich. He advised that mealie meal should remain affordable and accessible by the majority poor for survival and government should continue to ensure the commodity remained affordable.