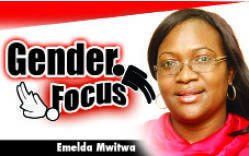 Gender Focus with EMELDA MWITWA
SENIOR Chief Madzimawe of the Ngoni, a child rights activist, has in the recent past been making news for censuring parents and men for infringing on children’s rights.
Through his Madzimawe Foundation, the chief has been encouraging girl children to delay marriage and put education first.