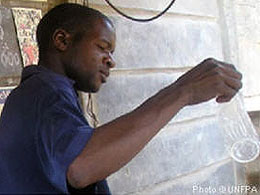 DORIS KASOTE, Johannesburg
AFRICA needs to be open about the use of condoms if the prevalence of HIV has to reduce, a Zambian medical doctor has said.
Kanyanta Sunkuntu, who was speaking during a workshop organised by the United Nations Fund for Population Activities (UNFPA) for female writers in Africa, said the continent needs to move away from not publicly discussing uncomfortable topics if the fight against HIV has to be won.
â€œCulture has changed. HIV has changed our culture. If we do not discuss sex and the use of condoms, people will continue dying,â€ he said.
Dr Sunkuntu said during a presentation on condom use that countries like Thailand have vigorously championed the use of condoms and this has seen a drastic drop in new HIV infections.
He described as unfortunate that some men who are usually the decision makers want to find reasons for not using condoms, adding that the low levels of condom use result in the spread of HIV.
With the female condom, he acknowledged that it was not readily available, which posed as a challenge to women who wanted to protect themselves.
â€œThe scarcity of female condoms is because they are not as old on the market as the male condoms. This makes it easier for men to access condoms as opposed to the women,â€ he said.
Dr Sunkuntu also noted the importance of involving end users when branding some condoms like the case is in Lesotho.
He called on governments to invest in procuring condoms to win the fight against HIV and AIDS.