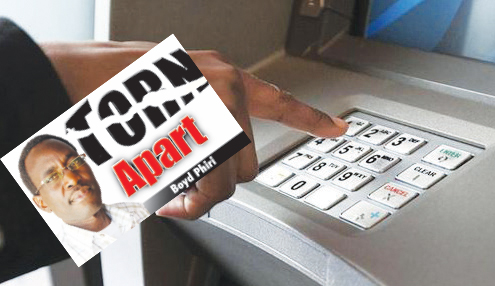 Torn Apart: BOYD PHIRI
IT’S not often that you hear a sex worker saying that zangena [it’s in], a new catch phrase in the hood referring to money from an

employer credited in one’s bank account at the month-end.
In other words zangena is an expression of joy or satisfaction when an employee finds that his salary has been credited to his bank account at the month-end.
Don’t get me wrong, I am not saying that it’s weird for sex workers to have bank accounts where their payments can be credited and join in the zangena frenzy in workplaces at month-ends.
Of course, the zangena craze does not apply to a hand-to-mouth situation, particularly where life revolves around self-employment like sleeping around in sex dens for a pittance far removed from a bank account status.
How do you expect a sex worker who gets a meagre K5 as payment after having a roll in the hay to go back in the hood and announce that zangena?
Obviously, all housewives up early on their chores in the hood would drop their brooms and say, “Don’t misuse the word zangena”.
“That’s not what our husbands mean when they knock off from work at the month-end and excitedly tell us that zangena,” one woman would say to a returning sex worker after her night out.
“Why shouldn’t I say zangena like every worker who gets paid?” a sex worker would ask.
“You don’t have a bank account where your employers, oh sorry, your clients deposit your payment at the month-end for you to excitedly say zangena,” another housewife would say to a sex worker.
Housewives in the hood know that for one to say zangena, he or she must have been patient for 30 days or more before seeing money in a bank account.
In other words, the phrase zangena in workplaces personifies the longing for salaries among employees and the hope the long-awaited payment brings to people to renew their friendships with landlords and money lenders.
It’s amazing what money can do to people in the hood. Yes, with everyone feeling like life is a rut, month-end makes all the difference, especially when those in gainful employment announce in the hood that zangena.
Apparently, the term has become so popular that one mobile phone service provider has adopted it in its marketing strategy.
I bet, the company does not want to put its clients in the emotional situation where, in workplaces, zangena is now synonymous with being patient for 30 or more days before one can see money in his bank account.
However, the argument that sex workers cannot join the zangena obsession in workplaces is not letting call girls lose their desire to open bank accounts, especially after one of them in Mpika stole K32,000 from a client recently.
Obviously, with this kind of ‘income’, one needs a bank account. I mean, every worker has to be rewarded for his or her patience at one point or another.
I bet, until the cops in Mpika arrested the sex worker, she felt like zangena, although without a bank account to bask in the joyous feeling of seeing the credited money.
She must have felt lucky, one moment she is wondering where the money will come from at the bar, the next moment she is making out with K32,000 from a man who had hooked her for a night.
I am sure she had told everyone in the hood that zangena, but unfortunately the next day she was being told by the cops that “uzadya beans mu jele,” meaning, “you will eat beans in jail”.
Nevertheless, life is a cycle of despair. Until you tell everyone in the hood that zangena, you’ve got to be patient to see your money in the account at the month-end.
bjboydphiri@yahoo.com