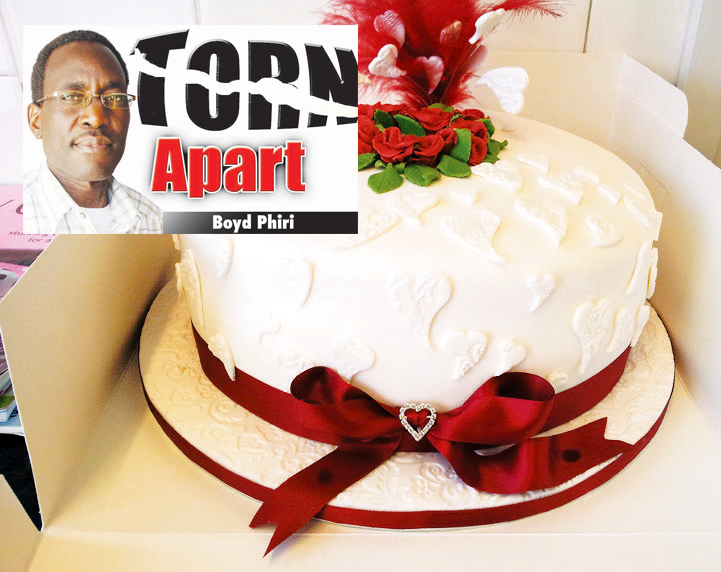 Torn Apart: BOYD PHIRI
IF YOU see me laughing heartily and behaving strangely on my birthday one of these days, donâ€™t think I have gotten off my rocker.
The thing is, with too many people learning how to bake cakes in the hood, you are bound to get overjoyed by one of the best cake recipes.
As cakes go, savoury cakes baked for the entire hood are not the ones you might find in a cake shop in town with a recipe which only includes flour, sugar, eggs, butter and oil.
These are cakes which can have five or more ingredients to get hood-dwellers ecstatic on their special day, including World Teachers Day.
But if teachers needed a cake to commemorate their special day recently, they were forced to have more ingredients in their cake than they bargained for.
If you have never heard about what happened to some educators on World Teachers Day, the story is that two pupils of Ndola baked a cake for their teachers laced with cannabis.
According to the news monitored by the hood, the cake tasted like any other cake until five teachers started laughing at full volume and behaving strangely after consuming it.
Of course, laughter is good for our health. Doctors say laughing lowers blood pressure, reduces stress hormones and increases muscle flexion.
We are also told that laughter increases the circulation of antibodies in the blood stream and makes us more resistant to infection.
But the belly laugh the teachers gave was not one you willingly let out to reduce stress hormones or increase muscle flexion, especially that they did not bargain for it.
It was inflicted on them by some naughty pupils who probably wanted to pay back for some unspecified grievance.
Unfortunately, two of the teachers got very sick and ended up at Ndola Central Hospital for treatment.
What I donâ€™t know is the time they took laughing heartily before they realised it was making them sick.
But all the same, the incident made sad reading and it is difficult to imagine that pupils, and not cadres, could harbour weird ideas of making their teachers have the last laugh for whatever provocation.
Hopefully, it didnâ€™t have anything to do with the teachersâ€™ refusal to be drawn into exam malpractices as examinations step into gear.
It seems the pupils acted on their own because some ganja peddlers in Chibolya township in Lusaka, which has resisted to let go of the three-leaved plant in recent years, have not claimed responsibility for the teachersâ€™ ordeal.
In fact, the action by the Ndola pupils must have left the Chibolya peddlers embarrassed because they have never performed such tricks on anyone, let alone the Drug Enforcement Commission (DEC) or police for persistently pursuing them.
Luckily, the pupils were arrested by the DEC for alleged drug trafficking and later detained by the police.
DEC public relations officer Theresa Katongo said what the pupils did was sickening.
â€œThe Commission would like to warn school-going children to desist from engaging in illicit activities as they risk ruining their future,â€ she said.
This is not to say that the two pupils who baked the cake laced with marijuana for their teachers belong to the youth wing of Green Party, which advocates legalisastion of cannabis in Zambia.
In the event of claiming to be Green Party members, its leader Peter Sinkamba would have disowned them because baking cakes is not in the partyâ€™s transformational agenda.
Neither do the pupils come from Trench Town in Jamaica nor understand what motivated Nah Goa Jail song by reggae maestro Peter Tosh.
Perhaps, the only thing they know about plants is the chlorophyll, which gives leaves their green pigmentation and absorbsion of sunlight to synthesise carbohydrates from CO2 and water.
In fact, the only time some pupils have been asked to bring leaves as specimen is during their lesson on plants in a biology class.
Nonetheless, you never know when pupils decide to take their lessons on chlorophyll and plants to extremes.
This could have happened to anyone on their special occasion, including World Toilet Day, World Earth Day or indeed Zambia Air Force Day, Zambia National Service Day or Army Day.
Talking about World Toilet Day, if the pupils had decided to bake a cake laced with cannabis for the occasion, some toilet cleaners would have been seen laughing aloud at public toilets.
But unlike the five teachers on World Teachers Day, toilet cleaners would be accused of laughing at some people making the loo stink like a billion bottoms breaking wind.
All plumbers would stop unblocking sewer lines in the hood after eating a cake laced with ganja.
What if Zesco technicians were victims to these cakes, expect load-shedding while Zambia Correctional Services officers would open days to allow prisoners to walk away unaided.
I hope pupils in the hood wonâ€™t emulate their two colleagues of Ndola and bake cakes laced with cannabis on Zambiaâ€™s 52nd Independence Day celebrations on October 24.
bjboydphiri@yahoo.com

Tagscakes and international events of