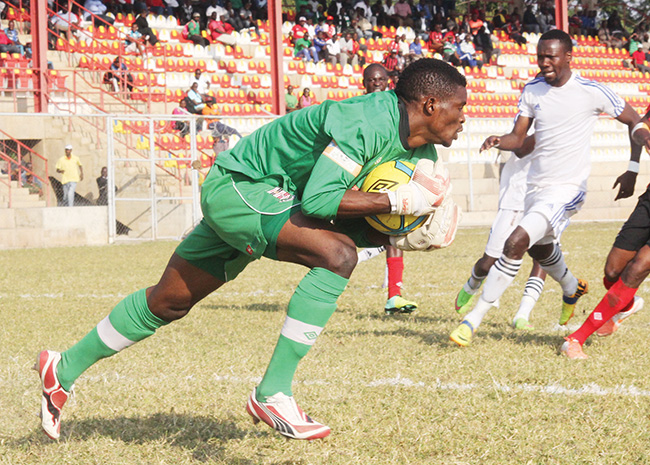 first leg against South Africa in East London due to injury.
And Bafana Bafana coach Stuart Baxter has summoned five players from the South African first division outfits after Absa Premiership clubs withdrew their players.
Zanaco custodian Nsabata sustained a knock during the MTN Super Division Week 21 match against Green Eagles that ended 1-1 at National Heroes Stadium in Lusaka on Monday.
Nyirenda described Nsabata’s injury as a blow.
“Toaster has a knock. The doctors have taken him to the hospital to be observed. He will be certified fit or unfit by the end of the day. We are worried but we have back-up. The boys are there,” he said in an interview after a training session at Woodlands Stadium in Lusaka yesterday.
He has also summoned Power Dynamos striker Alex Ng’onga to replace Brian Mwila, who has joined South African top side Platinum Stars.
Ng’onga last featured for Zambia in an international friendly against Rwanda on March 29, 2015 that the Chipolopolo won 2-0 in Lusaka.
Nyirenda said Ng’onga is an experienced player who will add depth to the squad.
He also said players will not be released to feature for their clubs in midweek games.
Nyirenda said the Chipolopolo are targeting a good result against Bafana Bafana.
He has named 20 players for the outing to South Africa.
Goalkeepers are Nsabata and Allan Chibwe while Isaac Shamujompa, Donashano Malama, Simon Silwimba, Fackson Kapumbu, Boston Muchindu, Ziyo Tembo, Adrian Chama and Moses Nyondo are defenders.
Midfielders are Godfrey Ngwenya, Jackson Chirwa, Collins Sikombe, Augustine Mulenga, Ernest Mbewe, Mike Katiba and John Ching’andu, while Justin Shonga, Martin Phiri and Alex Ng’onga are strikers
Meanwhile, Baxter has summoned Keagan Pool and Tshepo Maboa (both Stellenbosch FC), Thato Lingweti, Mpho Rasilingwane and Lindokuhle Mntambo (all from Jomo Cosmos).
Last week 10 players were withdrawn by their clubs.
These are Boalefa Pule, Ayabulela Konqobe, Michael Morton (all AmaZulu), Mothobi Mvala (Highlands Park), Siyabonga Nhlapo, Denwin Farmer, Cole Alexander, Teboho Mokoena (all SuperSport United) and Tercious Malepe (Orlando Pirates) while Riyaad Norodien (also Orlando Pirates) withdrew because of an injury.
“The truth is, we understand that this competition comes at a very difficult time for clubs when they are in pre-season training but we have been left frustrated by the continuous withdrawals of players which, in some cases, we understand. So it has not been a great experience for us in the national team as we have had to focus our attention on which players we have or are coming, instead of working on our plans for Zambia.
“It has really been frustrating, hopefully from tomorrow [yesterday] we will be able get down to the business of what we are here for, which is to prepare the team for a very crucial match,” Baxter told KickOff.