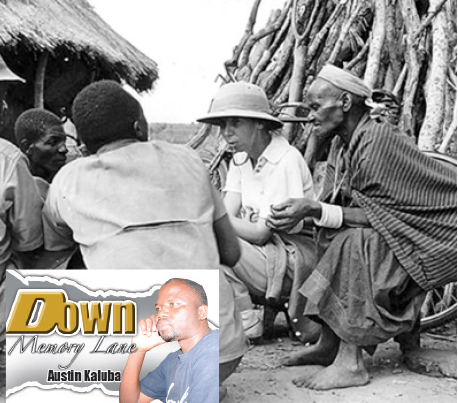 DOWN MEMORY LANE with AUSTIN KALUBA
This week I will look at Northern Rhodesian reports showcasing tribal stereotypes some of which have survived to date. I have heavily borrowed from Robert Codrington (Administrator of North-easter Rhodesia) for the two years ending March 31 1900, and Robert Young, Native Commissioner at Chinsali (then known as Mirongo), who has made an exhaustive study of many of the eastern tribes.
1. Robert Young, Native Commissioner at Chinsali, who has made an exhaustive study of many of the eastern tribes wrote that the Awemba (Bembas) were strong, intelligent and an adventurous race fond of travelling. The Bembas were well adjusted to using amachila â€“ palanquins and load carrying.
Formerly turbulent and a menace to all the weaker tribes, they have long since shown that, wisely administered, they are amenable to discipline.
They constitute the aristocracy of the country and there is a striking similarity of feature among the members of their royal family, while the dignity of the men and the grace of the women are remarkable, even among the commoners.
2. The Amambwe â€“ Mambwes-inhabit a large portion to the north-east of the plateau. Pre-eminently peaceable agriculturalists and husbandmen. They suffered severely from the plunders of the Awemba previous to the coming of the Europeans. The Mambwes were only saved by the advent of the London Missionary Society and later of the British administration. They possess considerable intelligence and make good station workers, but their physique is not of the first order and their character is somewhat unstable.
3. The Walungu-Lungus whose original home was around the southern shores of Lake Tanganyika can hardly be distinguished from the Amambwe. Indeed, in the opinion of some competent judges, the very names of the two are interchangeable. They also suffered extremely from the incursions of the Awemba.
4. The Winamwanga-Namwangas reside in the Fife division (Isoka). They are quiet and fairly industrious, and grow tobacco. They have very few cattle, probably owing to the combined effects of rinderpest and Awemba raids. Since the advent of Europeans, they have shown themselves most loyal, peaceful, and law-abiding. Among this tribe crime is almost unknown. The tribesmen do not easily make friends with outsiders. Their chief is in German East African â€“Tanzania-territory, and they still continue to acknowledge her.
5. The Walambia. Lambyas – A small tribe of industrious and willing people, under two chiefs, Muyereka and Mwiniwisi.
6. The Nyikas.Â  – These people are of fine physique, independent, but very loyal. They are good workers and exceptionally intelligent. Their â€œcountryâ€ is situated high up among the Namitawa mountains.
7. The Bisas form a large section of the Mirongo district (now Chinsali), and are also found in the Kasama district and around Lake Bangweulu. They suffered severely from Awemba raids, and many were sold into slavery among the Arabs and Swahilis. Others were driven to the swamps and islands of Lake Bangweulu, while others took refuge east of the Luangwa. They were formerly an industrious people, great weavers of cotton cloths and workers in iron. They also bartered these articles, becoming rich in flocks of sheep and goats. The standard of morality of the Lake Bisa tribe is perhaps lower than that of any other plateau people, but their general intelligence is high.
8. The Wasenga. – This tribe inhabits the Luangwa Valley, and cultivates a large area. Mr Young states that their villages are the filthiest that he has seen in his travels. Formerly living as they did in terror of the Arabs, Awemba and Angoni, they built their villages in the midst of almost impenetrable thickets.
9. The Swahilis are mostly natives of this country, though some of them have made journeys to the coast. Others are the offspring of Swahili men,Wembas, Bisas and Sengas or other local women. They are industrious in their own way and are fond of elephant hunting, mat-weaving and making wooden boxes.