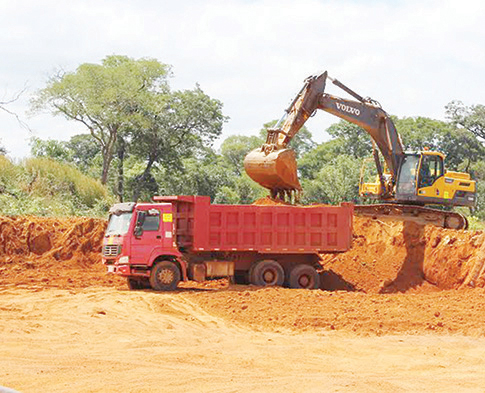 PRISCILLA MWILA, Mansa
MINISTER of Housing and Infrastructure Development Ronald Chitotela says Government will not extend the contract for the construction of the Pedicle Road and Lubembe Bridge.
Mr Chitotela said Copperfield Mining Services, the contractor for the project, is expected to hand over the project in October this year.
He said in an interview that people in Luapula have waited for a long time for the road and the bridge to be completed, hence the need to expedite works.
â€œI am happy with the work that has been done at the bridge, but the contractor needs to accelerate his pace. I expect him to hand over the entire project this year. We have given the contractor enough funds to complete the work on time,â€ he said.
Mr Chitotela urged the people of Luapula and Copperbelt provinces to continue to be patient as the contractor finalises the works.
He said the road will positively contribute to the countryâ€™s economic development once completed.
Mr Chitotela said Government is committed to ensuring rural areas are developed through infrastructure.
He said the project is being supervised by the Road Development AgencyÂ  Luapula regional office.
Mr Chitotela, who inspected the project on Wednesday, said the road and the bridge are being constructed at a cost of K304,279,843.26, and that 71 percent of the work has been done.
The continuation of works to upgrade 70km of the Pedicle Road was awarded to Copperfield Mining Services in October 2012 following the termination of the initial contract given to Frattelli Locci.
Meanwhile, Sub-Chief Natende wa Lushiba has appealed to Government to speed up works on the Kashikishi-Luchinda-Kaputa road in Chiengi district to open the area for investments.
Katele Kalumba said Chiengi district has the potential to be a tourist destination but lacks the needed resources.
â€œI am happy with the directive by President Lungu to grade some roads in the district. There is need to explore more districts such as Chiengi as they have the potential to change the economic status of the country,â€ he said.