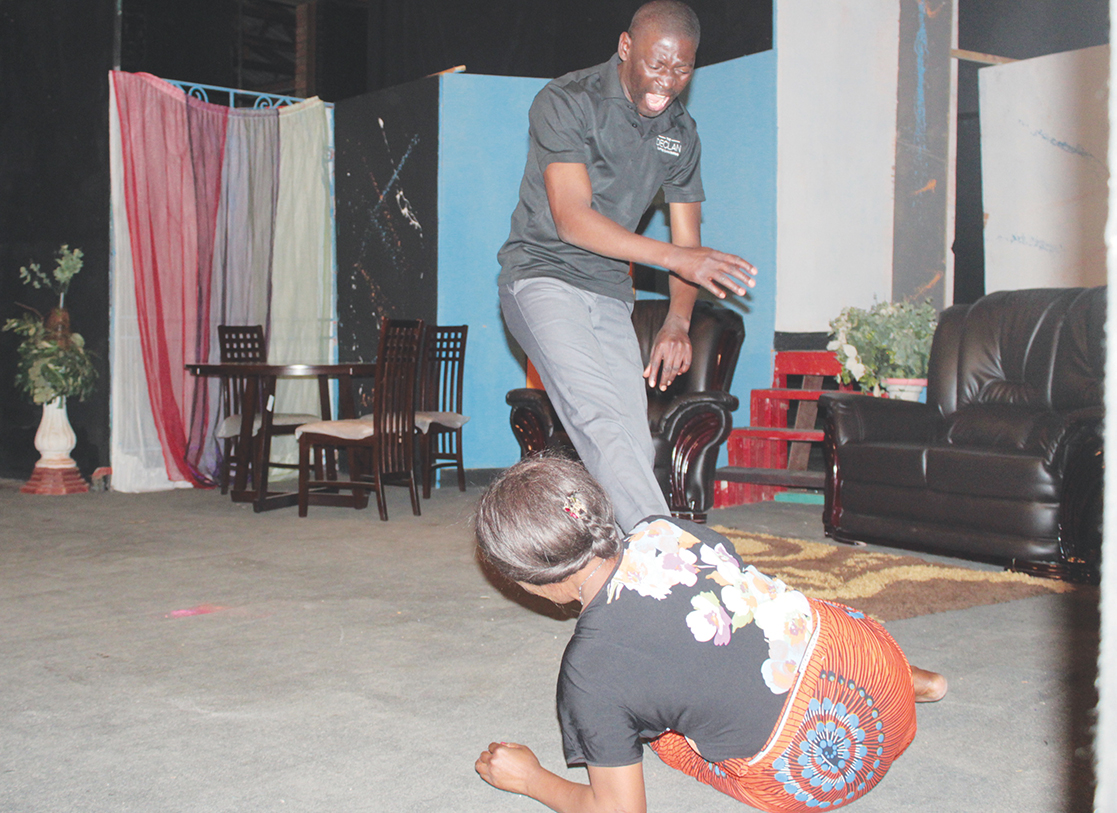 DALITSO explodes at his wife in ‘Bride Price’, a play by Nkwazi Theatre Club which was staged at the Lusaka Playhouse last weekend. PICTURE: CHANDA MWENYA

Club was using as a fund-raiser.
The play was meant to address issues of gender-based violence in communities and featured the character, Dalitso, at the centre of the drama’s theme.
Dalitso wishes to marry a girl named Mich but his aunt and uncle are against a union between the pair because Mich’s family is demanding an exorbitant bride price.
Dalitso’s father is also seriously ill and his aunt and uncle feel that money should be channelled towards his medical needs rather than on bride price.
It is difficult for him to change his mind because he is madly in love and even threatens to elope with Mich if it should come to that.
However, he is uncompromising about his decision to marry and goes ahead minus the blessing of his family.
The marriage begins on a happy note with Dalitso and Mich enjoying marital bliss but soon breaks down with Dalitso’s estrangement from family and finally with the news that his father has died.
His uncle arrives at his home to personally deliver the sad news, which leaves Dalitso in utter shock. He is also completely overwhelmed by guilt for neglecting his father during his time of need.
Their honeymoon is short-lived after that and Dalitso becomes extremely violent towards Mich. She does not understand the sudden change in his behaviour because he does not immediately tell her that his father is dead.
Instead, he turns into an absolute monster, and when Mich’s sister comes over for a visit, he makes them both his hostages.
Both Mich and her sister are raped by Dalitso inside the house and fail to escape their prison. While they are locked up inside the house, Dalitso goes to work and carries on with life but the noticeable absence of his wife and sister raises questions.
His mother appears from out of the blue on a day a violent fight erupts between him, his wife and his sister-in-law.
She specifically wants to find out if the rumours that he has turned into a monster are true and finds him in a bloodied shirt.
He asks her to kill him, saying he does not deserve to live, but his regret seems to come a little too late as his wife is discovered to have committed suicide in their bedroom.
While the action on stage was deeply moving, the audience lacked theatre etiquette and laughed during many intense moments.
Minister of Home Affairs Stephen Kampyongo, who was in attendance at the show, said the standards of the playhouse need to be lifted.
Minister of Justice and National Theatre Arts Association of Zambia (NATAAZ) patron, Given Lubinda, who was an invited guest, echoed Kampyongo’s words regarding the dismal state of the Lusaka Playhouse.
He also encouraged artistes to be punctual when hosting shows and promised that NATAAZ would put together a series of performances to help raise funds for Lusaka City Market, which was recently destroyed by fire.