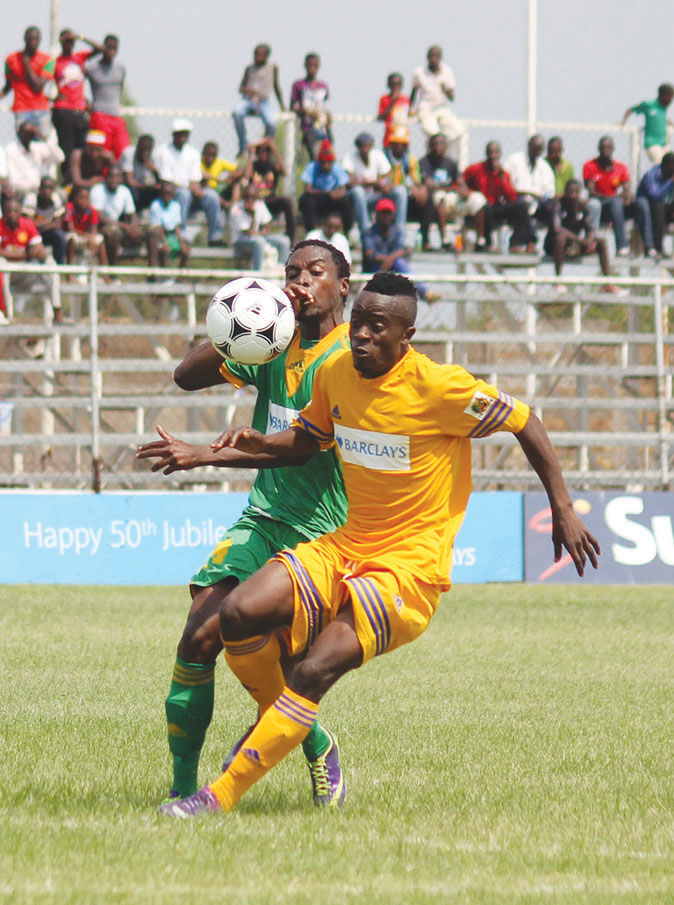 HONE SIAME and MULWANDA LUPIYA, Kitwe
NKANAÂ Â  2Â Â  BLADES 0
NKANA and Zesco United yesterday stormed the 2014 Barclays Cup final after winning their respective semi-final matches at Arthur Davies Stadium in Kitwe.
Claude Bwalya and Simon Bwalya contributed a goal each in the first half as Nkana dwarfed Konkola Blades in the second semi-final of the doubleheader to clinch a debut Barclays Cup final appearance while Zesco beat Napsa Stars 1-0.
Claude opened the scoring for the Kitwe giants in the 38th minute with a volley after being set up by Kelvin Mubanga.
The goal came a minute after defender Christopher Munthali had his penalty awarded by referee Wellington Kaoma saved by goalkeeper Collins Chomba after Simon was hacked in the box.
Nkana, who were a marvel to watch, continued to torment Blades and were rewarded in stoppage time of the first half when Simon slotted in a Ronald Kampamba cross.
To reach the semi-final stage, Nkana beat Power Dynamos 2-0 while Blades edged Zanaco 1-0.
ZESCO 1 NAPSA 0
Midfielder Mathews Nkhowani came off the bench to fire three-time champions Zesco to the fina.
Nkhowani, who replaced John Chingâ€™andu at the hour mark, netted a superb header in stoppage time after benefiting from Mwape Mwelwaâ€™s corner.
Zesco started the match on a fast note and could have taken a lead in the 24th minute but Jackson Mwanzaâ€™s thunderbolt was thwarted by an alert Napsa goalkeeper Philip Banda.
Five minutes later, Napsaâ€™s Ivorian forward Jean Paul Simao was equally denied from close range by Zesco goalkeeper Jacob Banda.
After the break, Napsa took the game to Zesco forcing coach George Lwandamina to make three tactical substitutions by unleashing Nkhowani, Maybin Mwaba and Mwape Mwelwa for Chingâ€™andu, Cletus Chama and Winston Kalengo, respectively.
With a minute before time, Nkhowani delivered a masterpiece of a goal that left Banda rooted to the ground as Zesco marched towards clinching the fourth Barclays Cup title.
Zesco beat Mufulira Wanderers 2-0 in the quarter-finals to reach the last four while 2012 champions Napsa edged Division One (South) side Lusaka Dynamos 1-0.
Winners will walk away with K250,000, runners-up K150,000 while the coach and player-of-the-year will get K10,000 and K5,000, respectively.