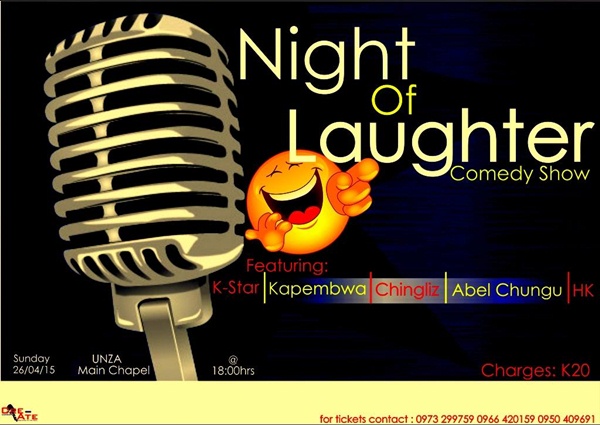 ZIO MWALE, Lusaka
KNOWN for its comedy shows, Night of Laughter will tomorrow hold a comedy night at the University of Zambia Chapel at 19 hours to celebrate its first anniversary.
The show will feature local seasoned comedians like Cheelo Mwanachungwala, Abel Chungu, Emmanuel MC, Kapembwa wanjelani, Daniel Lyapa, aka K Star, and Mumba Hubert, aka Chingliz, among others.
In an interview with the Weekend Mail, Night of Laughter Comedy Show founder Hubert Mumba said the group has had other shows held last year in Lusaka, Copperbelt and Livingstone, but this one is meant to celebrate the existence of his team in the Zambian comedy industry.
â€œThis show will be used as a platform to develop our talents as well as tap new talent in the comedy industry.
â€œAnd after every show we have a percentage of the proceeds for charity works as a way of giving back to our community,â€ Mumba said.
Mumba who is also one of the comedians expected to perform during the event, said people should expect nothing but ever-changing jokes, laughter and fresh material because the comedians are geared and ready to crack peopleâ€™s ribs with purely original Zambian standup comedy.
Night of Laughter Comedy Show posted the event on its Facebook page to announce the event to its fans. â€œWashalawashala [hurry hurry], here it is, to celebrate our one year anniversary, we take it back to where it all started.
â€œSo, we want to fill up the UNZA Chapel as you celebrate with us. Itâ€™s the Night of Laughter 1 YEAR Celebration,â€ the post reads.

Tagsanniversary Night of laughter to celebrate