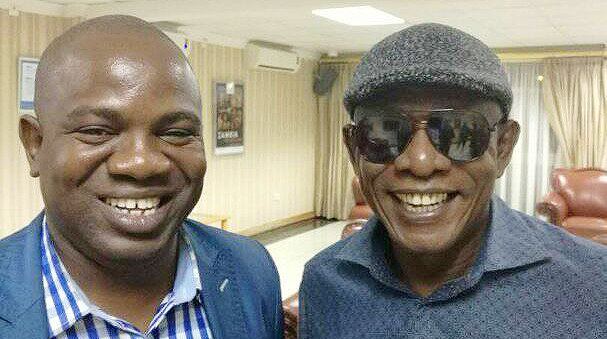 ZIO MWALE, Lusaka
POPULAR Nigerian actor, comedian and singer Ukwa arrived in the country in the early hours of Tuesday morning ahead of his show featuring a plethora of leading comedians at Mulungushi International Conference Centre in Lusaka tonight.

Ukwa, whose real name is Nkem Owoh, will be joined on stage by local comedians Bob Nkosha and his alter ego Dorika, Dangerous Joburg, Brighton “Big Head” Sinkala, Shike Mwisho and Collins “The President” Zulu for a comedy show that has been organised by the Zambia Comedy Magazine.
Dangerous Joburg (Derrick Chalo Kondowe), who will also host the comedy show dubbed “Local is Laka Comedy Festival – Ukwa Comedy Explosion” and Comedians Association of Zambia (CAZ) president Chibwe Katebe received Ukwa at Kenneth Kaunda International Airport.
Dangerous Joburg told the Weekend Mail that Ukwa safely arrived in the country and is geared for the performance tonight.
“Ukwa arrived around 01:00 am. We received him at the airport and he’s very much ready for the comedy show on Friday [tonight],” Dangerous Joburg said. “We urge all comedy lovers to come in numbers so that we can laugh together. This is the time for Zambians to see their favourite actor live in Lusaka, it will be very exciting because we have also put up the best local comedians to perform alongside Ukwa.”
Dangerous Joburg says the Local is Laka Comedy Festival will continue sharing and learning from other African countries in order to keep developing.
“We did this for cultural exchange and exposure, we need to learn from one another, we also can’t wait for the main event,” he said.
This is second time Ukwa is in the country having done so previously in 2007 when he performed at the Lusaka Playhouse and Mulungushi International Conference Centre.