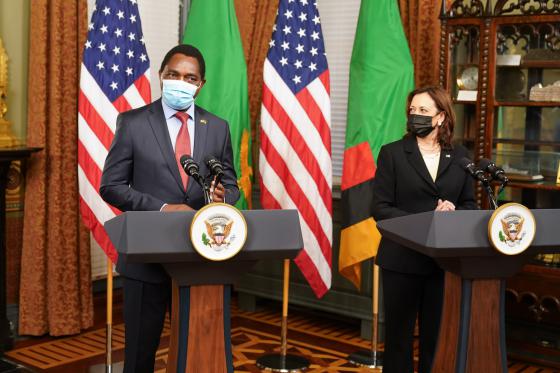 THE new dawn government has demonstrated principled commitment to following the rule of law in its fight against corruption in Zambia, and the United States (US) will partner with it in curbing the scourge. US Embassy chargé d’affaires Marty Dale is happy that Zambia is effectively countering corruption because the vice undermines the rule of law. Mr Dale says the US will work with Zambia and other countries that have demonstrated ethical commitment to following the rule of law in their battles to end corruption. He said this in response to a press query on allegations that the new dawn administration is instigating arrests of former government officials, opposition leaders and their supporters using law enforcement agencies.
Some immediate-past government officials who have been arrested are former Lusaka Province Minister Bowman Lusambo, past Minister of Home Affairs Stephen Kampyongo, Davies Chama for Defence and Joseph Malanji for Foreign Affairs.
Others are former Minister of Health Chitalu Chilufya, past Minister of Tourism and Arts Ronald Chitotela and former Luapula Province Minister Nickson Chilangwa. Mr Dale said if left unchecked, corruption erodes public trust and many other things.
“Corruption undermines the rule of law, steals precious resources and funding meant for delivery of crucial services that erode government institutional capacity and the public’s trust. “It ultimately spurs cynicism towards effective, accountable governance,” he said. Mr Dale said in June last year, President Joe Biden established the fight against corruption as a core US national security interest. He said the US welcomes the opportunity to partner with countries like Zambia that have demonstrated real commitment to following the rule of law in their efforts to curb corruption. Mr Dale said countries like Zambia are strengthening anti-corruption efforts and showing zero tolerance to the vice, which is critical for achieving long-term prosperity for citizens. He said President Biden’s initiative is included in the US strategy on countering corruption as it provides a comprehensive road map. The road map states how the government will amplify its efforts domestically and internationally, with governmental and non-governmental partners, to prevent, limit, and respond to corruption and related crimes.Mr Dale said the US government is committed to upholding the highest standard of integrity, ethics, and accountability for its foreign assistance. Currently, the US is implementing a comprehensive system of performance evaluation and financial oversight measures in Zambia and globally to meet that standard. CLICK TO READ MORE