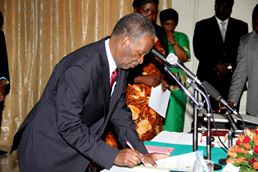 MOSES CHIPULU
ARE you failing to succeed because you canâ€™t persevere? Could your impatience be the main cause of your lack of success?
October 28 marked the death of President Michael Chilufya Sata in London. Upon receiving the message, I felt sad like many people. But more so, I was filled with deep sorrow.
The following day, I found myself reflecting on the life of this great son of Zambia.
At the end of my reflection, I came to learn a lot of lessons from this great son of the land. But of all the lessons I learnt from him, one of them stood out: His perseverance.
Anyone who has followed him will tell you that he was a man who dared to become President of Zambia against all odds.
Despite the criticisms, ridicule and hardships that he faced along the way, he soldiered on with valour and grace. And because of his no-nonsense style of leadership, he was nicknamed â€œKing Cobraâ€.
After losing presidential elections three times, it was going to be easy for someone to give up. But because of his never-say-die attitude he stood for the fourth time.
Unlike the previous attempts at the presidency, he finally emerged victorious and became the fifth President of Zambia. A true testament that with perseverance and sheer will, dreams can become real.
It is for this reason that you should also persevere. Because only then can you succeed and the following are the benefits of perseverance;
Firstly, only by persevering can you learn from your past failures, and turn them into success. An attitude of perseverance helps you to endure in times of difficulties. This helps you to come out of trouble as if nothing happened.
Third, it leads to maturity. Maturity comes from self-awareness and experiences as well.
Fourth, it leads to wisdom. This is because one of the definitions of wisdom is the practical side of knowledge. And as we know, it takes time to acquire knowledge, later on wisdom. And thatâ€™s how perseverance comes into the equation
More importantly, it leads to success. This could be evidenced by the late presidentâ€™s ascendancy to the highest office in the land.
Furthermore, you become a beacon to others who would like to become like you some day. Is it surprising that a lot of people are itemising a great deal about what they learnt from this hero.
On the flip side, without perseverance, the following are the outcomes:
Firstly, lack of perseverance leads to impatience. This means wanting to succeed right here and now.
This is what leads to wanting to resort to short-cuts, and as they say, â€œshort-cuts are long routesâ€.
Also, if not careful, or if one cannot persevere, he/she is likely to give up when the going gets tough.
Aside from that, one is likely to register miserable failure in his or her pursuits. As if this is not enough, one is likely to be a bad example and a let-down to others.
Lastly, learn to persevere. Because as Hernandez Vera once put it, â€œPerseverance is the key to the Lordâ€™s blessings.â€ And in the words of former US President Calvin Coolidge, â€œOnly determination and perseverance are omnipotent…â€
A transformatory and pragmatic leader he was. A champion! A great son of the land, and a true son of the soil.
May the soul of President Michael Chilufya Sata rest in lasting, eternal peace.Â  Until we meet again Mr President.
The author is a motivational speaker, writer, life coach and entrepreneur. E-mail: m_chipulu@yahoo.com