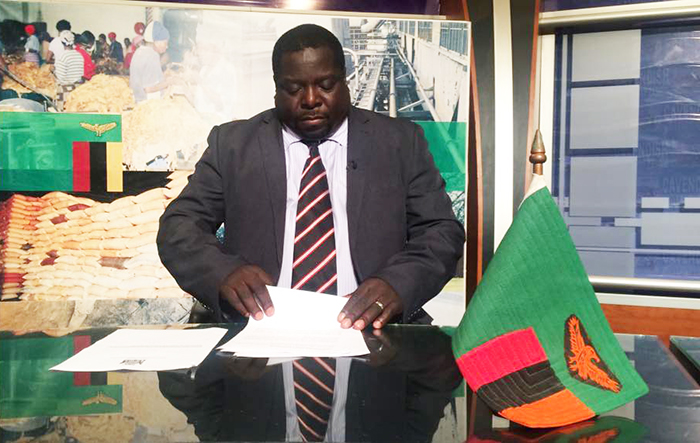 TEDDY KUYELA, Lusaka
CHIEF government spokesperson Chishimba Kambwili says Government will not re-table the 2015 national budget in parliament for amendment in view of the changes in the Mines and Minerals Act as suggested by some opposition leaders.
Forum for Democracy and Development (FDD) president Edith Nawakwi was recently quoted in the media as saying the 2015 national budget has allegedly collapsed and Minister of Finance Alexander Chikwanda should immediately present an emergency budget to Parliament.
But Mr Kambwili, who is also Minister of Information and Broadcasting Services,Â  said in an interview yesterday that Government will not take back this yearâ€™s budget to Parliament for amendment but will find alternatives to finance the deficit.
â€œI can describe this suggestion as a very big joke because there is no way we can take the entire budget to Parliament for amendment because of the changes to the Mines and Minerals Act.
â€œPeople should know that the budget is financed in so many ways and let me assure the people of Zambia that Government will find an alternative to fill up the gap,â€ Mr Kambwili said.
The minister, however, said the mining companies will be required to pay the old mineral royalty tax until the new changes to the Mines and Minerals Act are effected on July 1, this year.
On Tuesday last week, Cabinet approved the revision of the mineral royalty tax rate for open-cast and underground mining operations from 20 percent to nine percent.
This followed a special Cabinet meeting, which deliberated on the proposals to revise the 2015 taxation regime for the mining sector.
Before the K46.7 billion 2015 national budget was announced, mineral royalty tax for open-cast and underground mining operations stood at six percent.
Government has projected a revenue loss of K2.3 billion yearly as a result of adjustment in the law.
Meanwhile, Government is saddened by the untimely death of Muvi Television journalist Priscilla Phakati and three German doctors in a road traffic accident while on a tour of duty in Southern Province.
Chief government spokesperson Chishimba Kambwili said in a statement yesterday that it is painful that the four died while on a charitable mission to deliver healthcare services to the local people in the area.
â€œIn the case of late Ms Phakati, death has robbed the nation of a young and brilliant talent that held a lot of promise in the journalism career. On behalf of the Government, and on my own behalf, I convey deep-felt condolences to the bereaved families on this sad loss.
â€œGovernment also conveys its condolences to the government of the Federal Republic of Germany on the death of the three volunteer doctors who were on a medical humanitarian mission in Southern Province when the accident occurred,â€ Mr Kambwili said.
He wished the bereaved families Godâ€™s strength and comfort during this trying moment.
The four died in a road accident after the Toyota Prado they were travelling in collided with a construction vehicle on the Bottom Road in Gwembe.