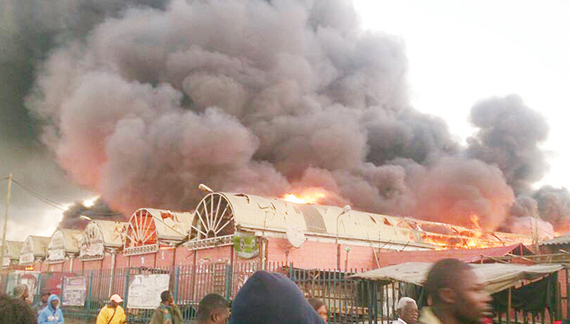 like fires and other destructive elements.
It is a sad situation that the absence of measures to forestall the spread of a fire was apparent when the market, which housed more than 2,000 traders, went ablaze on July 4.
A situation where property is destroyed because certain preventive measures were not put in place or were vandalised with time should not be allowed.
This calls for the need to carry out routine checks for equipment such as fire extinguishers, air vents and others which are aimed at enhancing the safety of users of public buildings.
It is in view of this that Vice-President Inonge Wina has called for the construction of strong infrastructure that has fire-fighting equipment, good water and sanitation.
The equipment Mrs Wina is calling for is necessary for every building, especially when we look at the number of people who use structures such as markets.
It is not just about people who use the markets, but much more, it is the fact that there are some people whose lives solely depend on such structures for earning a decent livelihood.
We feel with our colleagues who lost property and now their trading activities have been disrupted because of the fire that swept through the mammoth structure.
In June, the world witnessed the Grenfell tower fire. in London, where about 80 people are believed to have died after a fire swept through the 24-storey building.
The fire is believed to have started on the fourth floor and spread to other floors of the towering building.
The blaze affected most floors of the building and destroyed 151 homes, both in the tower and surrounding areas.
From both incidents, we can draw some lessons and one of them is that infrastructure should be constructed with fire-resistant material and all the necessary fire prevention equipment put in place all the time.
Where such equipment has been vandalised, it is the duty of those who own the building to replace them so that the users’ safety is guaranteed and property saved from destruction.
Mrs Wina, who was speaking when she received K100,000 donated by Barclays Bank towards the reconstruction of the market, called for the building of sustainable infrastructure that will enable people to conduct their businesses comfortably.
We believe that the rebuilding of the market will materialise Mrs Wina’s statement for the safety of marketeers and members of the public.
The lives of traders who depend on structures such as markets should be allowed to go on without disruption so that they send their children to school and meet other personal obligations to their families.
It also goes without saying that the disruption of the trading activities at the market has denied the Lusaka City Council revenue it collects from the traders and this we know has an effect on the operations of the council.
We urge that once the market is operational, the rules that prevailed must be adhered to, such as not allowing traders to cook, and we want to add that stricter measures be put in place for the safety of all who use the market.

Chilanga campaigns should be free of violence