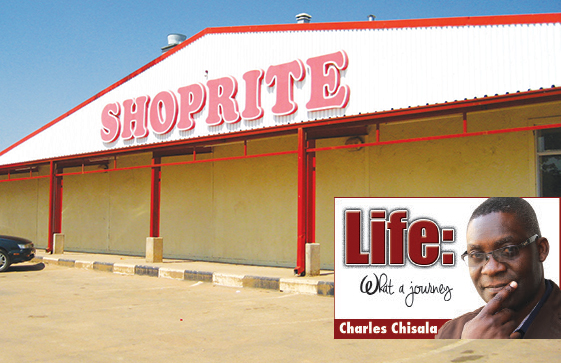 Life: What a journey: CHARLES CHISALA
I WOULD have been writing this column from a police cell had it not been for the transforming grace of my Saviour, Jesus Christ. It is a miracle!
You see I was in town last Sunday morning when I received a phone call from the woman of my house.
She was scheduled to travel out of town the next day, Monday. So she reeled off a list of items to buy for her from Shopriteâ€™s Cairo Road store.
Now Shoprite is the last place I want to be in the last week of the month when every family is stocking up their groceries.
Add those long queues of pathetic-looking cash transfer customers, and you feel like crying.
I tried to call the bluff by asking the woman of my house why she had not bought those items the day she had been doing her shopping.
But she was adamant. She insisted that I buy the items since I was the one who was in town.
My protestations were a waste of time. You see her mother-in-law, I mean my mother, has secretly taught her the trick she has used on me since I was a pant-wetting boy. It is a simple but devastatingly effective trick.
As I was grumbling into the phone the woman of my house called me by my pet name.
It is my royal clan name my mother used to call me every time I looked or sounded reluctant to perform a chore or run an important inter or intra-village errand for her.
So when I heard the woman of my house call me by that name I lost the argument. I will not disclose the name just now.
I could almost hear her gloating with triumph.
An hour later I was in Shoprite on Cairo road. After picking all the items she had mentioned, I joined one of the long queues.
Then this gentleman decides to form a â€˜rivalâ€™ queue cutting into the middle of ours three places in front of me.
I heard his friend who was closer to the till assuring him that he would allow him to join our line. But I wouldnâ€™t take it.
The bespectacled gentleman in me stepped aside and the kopala warrior that I used to be took over. I walked over to the â€˜friendlyâ€™ shopper.
â€œWhich one is the correct queue here?â€ I growled while looking in his eyes menacingly.
Before the man could answer I said while poking his chest with my forefinger, â€œShould you allow that guy to join the line here ahead of me I will come and grab your trolley and push it to the end of the queue.â€
Then the culprit, the one who was leading the rival queue, cut in, â€œThere is no need for quarrelling here. Letâ€™s just be reasonable and allow each other to buy. After all we all are spending money. Where is the problem?â€
I turned and walked over to him, glaring in his eyes. He must have had one too many the previous evening for his eyes and slurred speech betrayed a lingering hangover.
â€œYou are the problem. Yes, you are the problem,â€ I snarled, my right hand at the ready clenched into a rock-hard fist.
â€œIf all of us can join the queue at the back why canâ€™t you? How special are you?â€ I asked angrily.
The guy knew that he would be easy pickings for me, but since he was with his wife he had to put up some brave act to save himself the blushes.
What he did not know, however, was that as he was talking my eyes were busy selecting â€˜softâ€™ targets in his body where to hit him.
He was unaware that I used to be a seasoned street brawler in the past in possession of martial arts skills.
I could see three â€˜openâ€™ targets just begging to be hit as he was busy blubbering about every shopperâ€™s right to join the queue.
My quick assessment told me the guy is not a fighter, and that he was completely unprepared to fend off a surprise attack. His careless posture and flabby physical features told it all.
He is the type who just eat, drink and sleep without any physical exercise or self-defence training.
I was gripped by a strong temptation to strike him with a lightning punch to the throat, right side of the jaw or the place where the chest meets the belly.
The manâ€™s wife was pleading with him to stop arguing with me but just wait for their turn to be served. She was able to sense my intentions.
â€œAre you shouting at me?â€ I asked as I prepared to catch him unawares with a bone-shattering punch to the jaw.
Sensing danger the guy suddenly changed his tone and attitude towards me. â€œOkay, sorry bamudala. Itâ€™s okay, we will wait,â€ he said in a nice tone.
It was too late; I had made up my mind. In fact that was the best time to catch him.
Fortunately, before I could knock him unconscious with a vicious right connection to the chin my Lord Jesus, the Prince of Peace, touched my shoulder with his soft hand.
â€œKeep your cool, Charles. Donâ€™t succumb to Satanâ€™s temptation,â€ I heard him whisper to me in my heart. And I obeyed him.
Had it been 20 or more years ago I would have sent the guy into a semi-comma with a single blow, and ended up in a police cell myself.
Back home I narrated to the woman of my house what mess she had almost landed me into in the presence of two of our three boys, who laughed and wished they had witnessed the confrontation.
They have heard many stories on how I had been an involuntary beneficiary of police cell hospitality on numerous occasions for punching or kicking the daylights out of someone.
Today, Jesus rules.
charles_chisala@yahoo.com

Tagsflare in Shoprite Near punch-up as tempers

Have you made progress?
When a cop turns inquiries desk into mini-bar