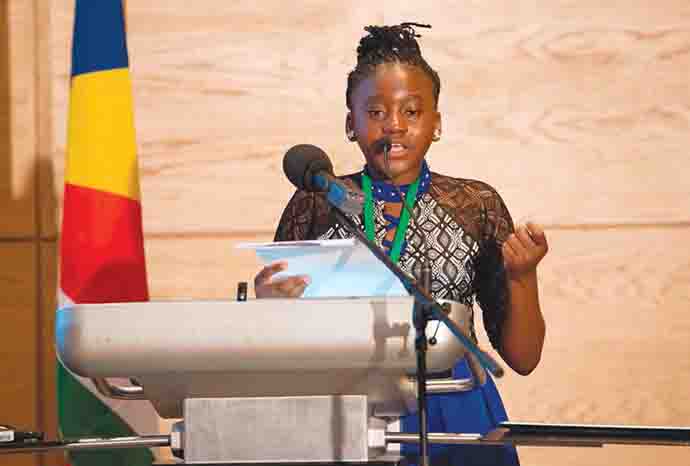 MATHEWS KABAMBA, Kitwe
WRITING Natasha Mwansa’s profile is not an easy undertaking – not because there is little to write about, but because there is so much going on for the 17-year-old.
For her age, you would expect her only preoccupation to be school, but for Natasha, her plate is probably overflowing for someone who completed school last year.
“I am a child rights activist and also see myself as a women’s rights activist and advocate. I am also a very proud sexual and reproductive health (SRH) activist and advocate.
“There are so many roles in terms of my advocacy titles. My home organisation is the Media Network on Child Rights and Development, which has helped me develop the skills that I use today in my advocacy work,” Natasha says.
At 14, as part of the United Nations (UN) youth programmes in Zambia, Natasha became a United Nations Population Fund (UNFPA) youth representative and ambassador.
Her list of roles and achievements are endless. In 2012, she emerged best speaker in the provincial debate in Southern Province, before being runner up in the Junior President contest in 2015.
The same year, she was appointed as Media Institute of Southern Africa (MISA) Zambia Child Rights ambassador, while heading her school’s debate club between 2014 and 2016.
Out of all her achievements, it appears the UN role is Natasha’s greatest.
“I represent the United Nations on different occasions at different events and one of the most outstanding is when I was selected to represent them at a SADC Parliamentary Forums first-ever Women’s Parliament in Seychelles last year.
“At the same event, I gave a keynote speech on issues girls in Africa face, with regards to sexual and reproductive health, among others.
“At Media Network, we produce works aired on radio and the significant one was the ‘Junior Reporters’ magazine. And, my interaction with the UN began there.
“They noticed me while I was a contestant during Junior President but I was a little too young for them to work with, but they waited till I turned 15 in 2016 and my official work with the UN began,” Natasha recalls.
Against what is considered the norm, Natasha enrolled for her Grade One at the age of three at Abraham Trust School in Choma before doing her Grades Three and Four at Longridge Boarding School.
An aspiring communication specialist, Natasha completed her education at Lusaka Secondary School.
“I would like to graduate with a degree in mass communication, public administration or development studies, and later get a masters in development studies. After that, I want to acquire a degree in either gynaecology or neuroscience,” she says.
Natasha gives credit to her parents, Charity and Watson Mwansa, for investing in her education.
A born again Christian, Natasha is also full of praise for Apostle Fredrick Kaluluma of City of the Lord Church for the mentorship and spiritual guidance.
Nicknamed ‘Gifted’ by her peers, Natasha’s gifts are clearly making room for her.