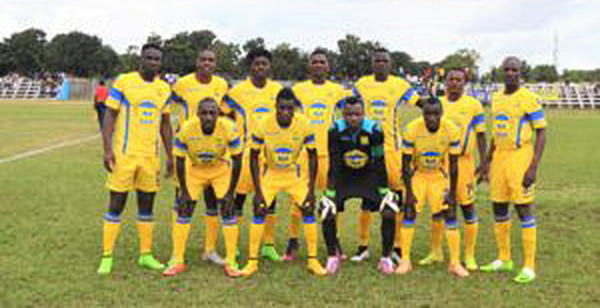 VICTOR KUMWENDA, Lusaka
NAPSA Stars today have an opportunity to reclaim leadership of the MTN Super Division when they face Nkana in a Week 22 match

billed for the mining town.
The Pensioners surrendered the top position to Zesco United last Sunday after losing 3-2 to Power Dynamos in Lusaka.
But Zesco went down 2-1 to Lusaka Dynamos on Thursday handing Napsa an opportunity to go top.
Zesco, who are away to Nchanga Rangers tomorrow, have 38 points, one better than Napsa. Nkana have 32 points.
Third-placed Power Dynamos are away to Nkwazi while Nakambala Leopards welcome Green Buffaloes.
Power, Buffaloes and Dynamos have 36 points apiece but the former have a better goal aggregate.
NKANA v NAPSA
Only victory at Nkana Stadium in Kitwe will take Napsa to the top.
As Napsa were losing to Power last Sunday, Nkana drew 1-1 with Nchanga Rangers making the tie a must-win for both sides.
When the teams met at National Heroes Stadium in Lusaka on April 22, Nkana won 2-0 in a Week Three match courtesy of Austin Muwowo and Shadreck Musonda’s goals.
Napsa’s visit to Nkana Stadium on October 30, 2016 ended in a 2-1 defeat and today they need to show character to return to winning ways.
Napsa coach Tenant Chilumba will rely on Chitiya Mususu, Simon Nkhata, Youremember Banda and Alex Mwamba to continue with the march towards their first league title.
But if Ronald Kampamba, Jacob Ngulube, Musonda, Danny Silavwe and Bornwell Mwape put in their best, then Nkana will edge Napsa.
“We take a serious approach to every game we play. It is going to be a serious fight for us because we plan to maintain our status on the log. It will be a good game and we are adequately preparing for it. Napsa Stars is a good side,” Nkana coach Beston Chambeshi said.
NKWAZI v POWER
Power could climb to the top if they beat Nkwazi and Napsa drop points at Nkana.
The Kitwe side has enough ammunition in Alex Ng’onga, Luka Lungu, Larry Bwalya, Benson Sakala and Kennedy Mudenda to overcome the cops.
But Nkwazi, who drew 1-1 with Dynamos on Monday, could shock Power if the visitors think it will be one way traffic.
The teams battled to a 1-1 draw in Kitwe.
Nkwazi have 28 points.
NAKAMBALA v BUFFALOES
When the sides met in Lusaka, Nakambala beat Buffaloes 1-0 courtesy of Ignatius Lwipa’s strike.
Nakambala will be looking forward to completing a double when Buffaloes visit Mazabuka.
After all, Nakambala edged the soldiers 1-0 at home last year after losing 2-1 in Lusaka.
But Buffaloes will look for inspiration from Diamond Chikwekwe and Friday Samu.
Fourth-placed Nakambala have 23 points.
WANDERERS v ZANACO
Champions Zanaco will be targeting to replicate the mockery of Mufulira Wanderers.
Zanaco thrashed Wanderers 6-0 on April 23 in Lusaka and a win is a must for the Bankers, who have drawn the last two games with Green Eagles (1-1) and a goalless draw with Lumwana Radiants.
But Wanderers need to start winning if they are to avoid relegation and coach Wilson Mwale, a former Zanaco assistant trainer, knows the visitors’ weaknesses and will instruct his players to capitalise on them.
Third-from-bottom Wanderers have 16 points.
Elsewhere, Green Eagles host Radiants and Red Arrows welcome Real Nakonde.