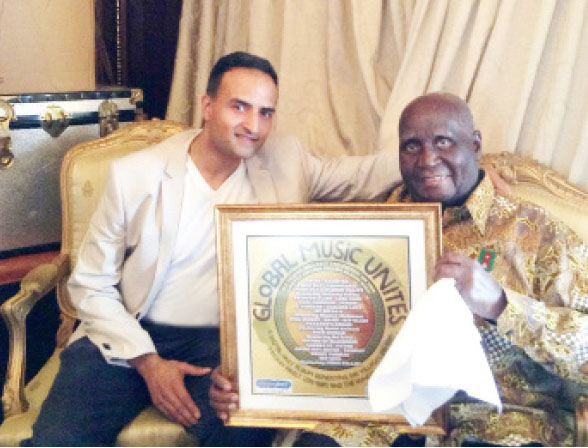 By CHISHALA MUSONDA
ZAMBIAâ€™S soul singer Amar Naik has joined other musicians for the Global Music Unites album aimed at raising funds for underprivileged children around the world, which includes the SOS Villages and Mission Direct in Zambia.
A total of 23 global music icons have come together for a third charitable cause this time dubbed â€œThe Hunger Projectâ€.
Global Music Unites is a brainchild of Soul/Music Records founder David Nathan, who is also co-owner of SoulMusic.com.
Naik, aka Zed Soul, has contributed a song titled Games We Play (In Love) to the 23-track album, and his song is a product of a collaboration with Chris Ballin, a skilled singer and songwriter of the United Kingdom whose silky smooth voice is comparable to that of late Luther Vandross.
Some artists that Ballin, a lead vocalist, backing singer and vocal arranger, has worked with in his career include late Vandross and Michael Jackson, Alexander Oâ€™Neal, Icognito, Pink Floyd, Shaggy, Donna Summer and Craig David.
This collaboration and contribution to the Global Music Unite project has excited the Ndola-born singer and producer.
â€œIt is something that is exciting for me to work with such people in the music industry and it is a privilege to give back to the community,â€ Naik said in an interview in Ndola recently.
Naik, who is based in the UK, has since returned to his base.
On his latest visit Naik met first republican President Kenneth Kaunda in Lusaka where he presented the Global Music Unite plate and explained the projectâ€™s intended beneficiaries.
And after meeting KK, Naik wrote on his Facebook wall: â€œI had a wonderful and memorable meeting with African icon, the founding father and first President of Zambia, His Excellency, Dr Kenneth David Kaunda (KK), to raise awareness for the Global Music Unites album project. We had a great conversation and I presented him with the GMU frame. He gave his heartfelt thanks and blessings to all who have contributed towards, and are supporting the project to help raise funds for SOS Childrenâ€™s Villages Zambia, Mission Direct Zambia and the Hunger Project UK.â€
Nathan, the co-owner of SoulMusic.com, also said this about the Zambian artiste: â€œI am so proud of my good friend and musical collaborator, the multi-talented Zambian-born music man Amar Naik (who produced the Zed Soul track â€œGames We Play (In Love)â€ (a song we co-wrote) featuring Chris Ballin . Amazing that he was able to present this frame of the Global Music Unites to such a distinguished and renowned African icon and leader, since our project benefits SOS Childrenâ€™s Villages Zambia, Mission Direct and The Hunger Project.â€
The Global Music Unites is a digital-only album project bringing together artists from the United Kingdom and the United States to raise funds for the three charities.
Created from Nathanâ€™s participation in the landmark worldwide training and development course, Global Music Unites has come up with digital-only exclusive tracks previously unavailable for download on any platform for release as a limited edition.
â€œ Global Music Unites brings together artists and musicians from the US and UK to raise funds for the three charities â€“ SOS Villages in Zambia, Mission Direct, also working in Zambia, and the Hunger Project. Net proceeds will be donated to these three worthwhile charities,â€ the description of the album reads.
Artists who have contributed songs include Grammy-winning soul and gospel group Sounds of Blackness, Grammy nominee and renowned saxophonist Najee and international best-selling UK duo Swing Out Sisters.