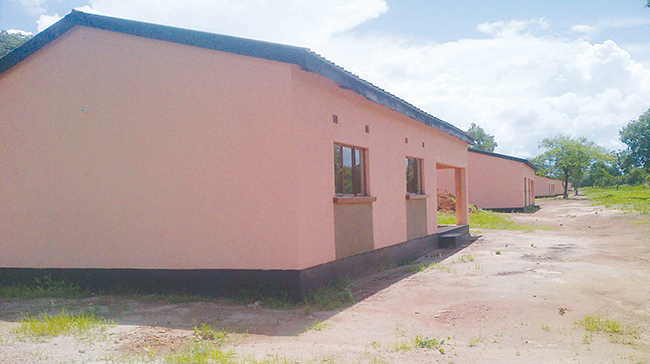 CHOMBA MUSIKA, Lusaka
FUMI Mutale, a resident of Mwansabombwe in Luapula Province has every reason to look to the future with confidence. The elevation of Mwansabombwe to district status means a lot to him.
â€œBecause Mwansabombwe is now a district, we no longer have to spend money to travel over 30 kilometres to Kawambwa district to access government services.
â€œBecause of our district status weâ€™ve also witnessed several government construction projects which are a source of employment for the locals,â€ Reverend Mutale said in Mwansabombwe recently.
The Pentecostal Assemblies clergyman is confident the declaration of Mwansabombwe as a district will in the shot and long term continue to impact positively on the welfare of residents, who are yearning for socio-economic development.
In 2012, late President Michael Sata declared Mwansabombwe, known to be the largest traditional village in Central Africa, as a new district after detaching it from Kawambwa, which lies on a plateau.
The new district nestles on the northern and Zambian side of Luapula River and is in the Mwata Kazembe chiefdom of the Lunda people.
When he announced the new status, Mr Sata said the creation of the new district was part of his governmentâ€™s resolve to take development to all the parts of the country.
Now, about three years after the creation of the new district, a Daily Mail crew that recently visited the area found that Government has not backtracked on fulfilling late Presidentâ€™s vision.
Senior Chief Mwata Kazembe released over 6,000 hectares of virgin customary land where a new town is being built.
And to kick-start development on the virgin land situated after Lufubu Stream about 12 kilometres from Mwansabombwe village, Government released substantial amount of money.
Mwansabombwe district administrative officer Abraham Mukunta said in an interview the construction works at the new town, some of which are nearing completion, will not only change the outlook of Mwansabombwe but attract investors to the area as well, whose economic mainstay is fishing.
The new town will house the district administrative offices, a post office, bank, restaurant, civic centre and a police station among others.
â€œConstruction of 10 houses for council workers at a cost of K3,948,467 by Stautone Company has been completed while construction of a post office at a cost of K2,009,370 by UNERIC Investment Limited is at box level,â€ Mr Mukunta explained after inspecting the works.
He said the construction of a police station and camp at a cost of K15,000 by Chima Chama Contractors is at superstructure stage while erection of 20 medium cost houses by Laurence Company is at roof and rim beam levels.
Construction of a civic centre and two high-cost houses at a cost of over K500,000 by Swadocom Company is also progressing well with the houses at roof level while the civic centre is at wall plate stage.
To address water blues, Government completed the erection of a water tank at a cost of over K900,000.
And in line with Governmentâ€™s employment creation agenda, a snap survey revealed that a number of local residents, majority of them youths, have been employed at various construction sites in the new town.
For instance, Laurence, the company building 20 high-coast houses, has employed 17 local builders.
â€œWe have employed 17 locals and the four women who have been engaged as cooks will also undergo a skills development training in bricklaying and plumbing,â€ Mr Christopher Mukuka, Laurence Construction Company foreman, explained.
And residents have commended the government for its commitment to developing areas like Mwansabombwe, which has potential to contribute to countryâ€™s economic growth once basic infrastructure are taken to the area.
â€œFrom the time we were declared a district, we have really appreciated the fact that the Government has started building modern structures in this area.
â€œThis is good because investors are attracted to places that have basic infrastructure. For instance the new township was a bush but modern structures are being built there,â€ Mr Joshua Chishala, of New Plots, said.
The youth, who also runs a grocery store, said the declaration of Mwansabombwe as a district has also boosted business in the rural district.
â€œThe expansion of the district has somewhat resulted into a population increase. Civil servants have been brought to work from here meaning we have more customers coming to buy our goods,â€ he said.
Mr Chishala, however, appealed to the government to consider upgrading the deplorable feeder roads in the district.
â€œApart from the poor road network here, we are also in need of a modern market,â€ he said.
Mwansabombwe district council chief administrative officer Joyce Sabanyama agrees with Mr Chishala.
What is clear, though is that three years from now Mwansabombwe will be a town with modern infrastructure.

Are we a nation of functional illiterates?
COMESA simplified trade regime bearing fruit