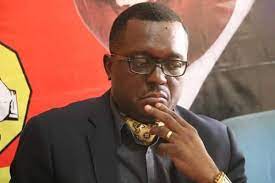 DIANA CHIPEPO, Lusaka
WHILE the move to have political structures in markets has been condemned, Minister of Local Government and Rural Development Gary Nkombo said any grouping is allowed to establish branches in public places as long as they do not interfere in the operations of local authorities. United Party for National Development (UPND) Lusaka Province chairperson Obvious Mwaliteta’s statement that the ruling party will establish branches in all public places, including markets and bus stations, has received condemnation. For most, the move may eventually take the nation back to the Patriotic Front (PF) days when cadres used to terrorise and extort cash from traders and bus operators in stations. But Mr Nkombo said yesterday that any grouping that includes political parties and churches has the fundamental rights of association. “We had a meeting among ourselves with the provincial chairman of Lusaka, who has made an intimation that he was grossly misunderstood when he said that the party was going to introduce branches everywhere, including markets and bus stations,” he said. “We have looked at that statement very closely together and in line with CLICK TO READ MORE

Now, this is class from Chief Mukuni
Probe all not just PF, demands Kateka