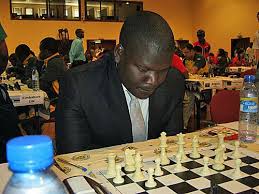 CHISHALA MUSONDA , Ndola
ZAMBIA International Master (IM) Chitumbo Mwali is in second position trailing Botswanaâ€™s IM Providence Oatlhotse by half a point at the 2015 Botswana Open International Championship.
The Zambian, who is the defending champion, is on 4.5 points in the prestige category while Oatlhotse with a 100 per cent record is in pole position after five rounds.
The tournament, which is being staged at Gaborone International Conference Centre, has attracted 50 players.
Godwin Phiri is in third place on four points while 11 players, who include three Zambians, are jammed in joint-fourth position on 3.5 points.
The three Zambians sharing fourth place are IM Gillan Bwalya, Musatwe Simutowe and former Zambia junior champion Prince Mulenga.
Mwali has won four games against Keletshabile Monnatsheilo, Abhiram Sasitharan both from Botswana in rounds one and two before splitting a point with fellow Zambian Mulenga in his third game.
In rounds four and five, the Zambian continued his dominance over his Tswana rivals, thrashing Spencer Masango and Barileng Gaealafshwe to move within half a point of Oatlhotse, who is yet to drop a point.
Phiri has lost once while Bwalya has recorded one defeat and a draw in five matches.
In round six, Mwali and Oatlhotse were engaged in a top of the table clash on board one with Phiri and Bwalya on board two in an all-Zambian affair.
Simutowe was on board six against Sasitharan and on board seven Mulenga was facing Kokome Oaitse of Botswana with Judah Simulundu, who has three points, having his game on board eight against Katlano Seforo of the host nation.
The nine-round championship ends tomorrow.