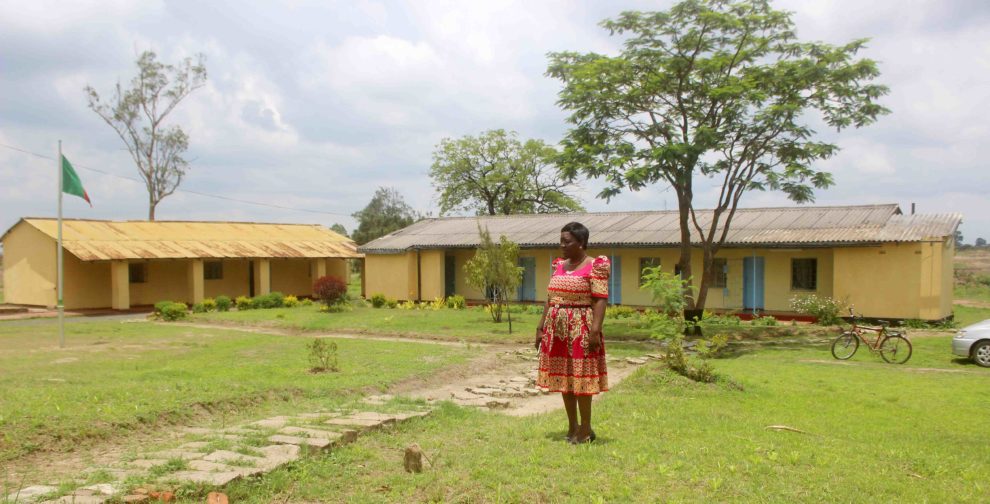 CHAMBO NG’UNI, Kabwe
WHILE focus in Mutwe wa Nsofu area of Kabwe is largely on the Black Mountain, a toxic mine waste dump, the settlement is slowly transforming into a budding township.

Obscured by Black Mountain, Mutwe wa Nsofu lies on the edge of the Kabwe lead and zinc mine, which ceased operations in 1994, leaving a trail of lead contamination within the surrounding environment.
The area is best known for the discovery of Broken Hill man. The skull of Homo Heidelbergensis of the Middle Stone Age was discovered in Mutwe wa Nsofu on June 17, 1921, during mining operations.
Mutwe wa Nsofu, however, remains a pale shadow of other townships dotted across Kabwe.
The latest positive development in Mutwe wa Nsofu is the establishment of Mine Primary School at the former offices of the Chibombo district education board.
The school is located about four kilometres from the former Mine Primary School recently upgraded into Mine Secondary School.
Pupils at the school are mostly from Mwashi Basic School in Railways township about four kilometres away. Others were pupils at St Marys and David Ramusho schools.
Thirteen-year-old Schoolwe Hamwiinga is one of the first pupils at the new school.
He is elated: “I am happy that we have this school near to my home. This is good.” Schoolwe, who is in Grade Six, was previously at David Ramushi School.
He used to cover a distance of about three kilometres on foot every day to attend classes.
Flanked by his friends, a beaming School we excitedly said he has settled well at his new school and looks forward to his Grade Seven final examinations, come 2018.
His wish is to see Mine Primary School provide quality education in a conducive environment.
Following the establishment of Mine Primary School, the number of primary schools in Kabwe has reached 31.
“This community [Mutwe wa Nsofu] has been disadvantaged as some children were not going to school,” Central Province education officer Jennipher Banda said.
Mrs Banda said the establishment of Mine Primary School is a fulfilment of Government’s desire to make sure more children access education without challenges.
Education is the biggest equaliser, Mrs Banda said, as it can make learners become successful people in future.
She urged parents in Mutwe wa Nsofu area and surrounding communities to ensure their children enrol at Mine Primary School.
“We expect you parents to work with the school management to ensure the school is functioning,” she said. “Ensure that you bring your children to get educated.”
Mrs Banda said the school will help in positive transformation of Mutwe wa Nsofu area.
There are possibilities that facilities like a health centre will be established in the area in response to the growth of the population.
Government wants schools built near communities like Mutwe wa Nsofu so that pupils are not covering long distances to access education.
Central Province Minister Sydney Mushanga said establishment of Mine Primary School is a breakthrough because pupils in Mutwe wa Nsofu area will no longer be covering long distances as the case has been in past years.
“This community has not had a school since Zambia gained independence and this is the first school in 54 years after Zambia got independence,” Mr Mushanga, who is member of Parliament for Bwacha Constituency, said.
The safety of younger pupils is guaranteed, he said, because they are not crossing many roads, as they used to the new school within reach.
Mr Mushanga said concerned parties should play their roles to ensure the administration of the school is helped to address challenges the institution is experiencing.
He said the Central Province administration will work with the provincial education office and the Kabwe district education office in helping Mine Primary School operate effectively.
“It has not been easy for children, especially the young ones, to cover long distance to go to other schools every day,” he added.
He implored Kabwe Municipal Council to facilitate the securing of the school land to prevent any encroachments.
Since September, when the school was officially opened, 152 pupils from pre-school to Grade Six have been enrolled.
Nine teachers have been employed.
School head teacher Racheal Shawa pledged that her management will do its best to inculcate sound knowledge and morals in the learners in line with the vision and mission statement.
“We pledge to work hard to uplift the education standards and help learners to be empowered with knowledge,” Ms Shawa whose school’s motto is ‘Knowledge is power,’ said.
A former deputy head teacher of Ngungu Primary School, Ms Shawa said her school has five small classrooms.
These classrooms were initially offices for Chibombo district education board, which is now operating in Chibombo.
The school, however, has inadequate classrooms, toilets, lack of furniture and computers and teaching aids.
Ms Shawa said there is need to build two one-by-three classroom blocks and at least two modern ablution blocks to create a better learning environment.
“The classrooms are very small. We need help to build new bigger classrooms because the number of pupils continues to increase,” Ms Shawa, the first head teacher of Mine Primary School, said.
Lemmy Chishala, a parent, commended government for establishing Mine Primary School.
“We were very concerned that we did not have a school here but now we are happy that our community now has a school,” Mr Chishala said.
Mr Chishala also urged Government to improve the condition of the access road to the school.
Mrs Banda also said education is not a preserve of children, but adults as wells.
She said efforts are therefore being made to introduce adult education at Mine Primary School as well as plans to transform the school into a secondary school in future.