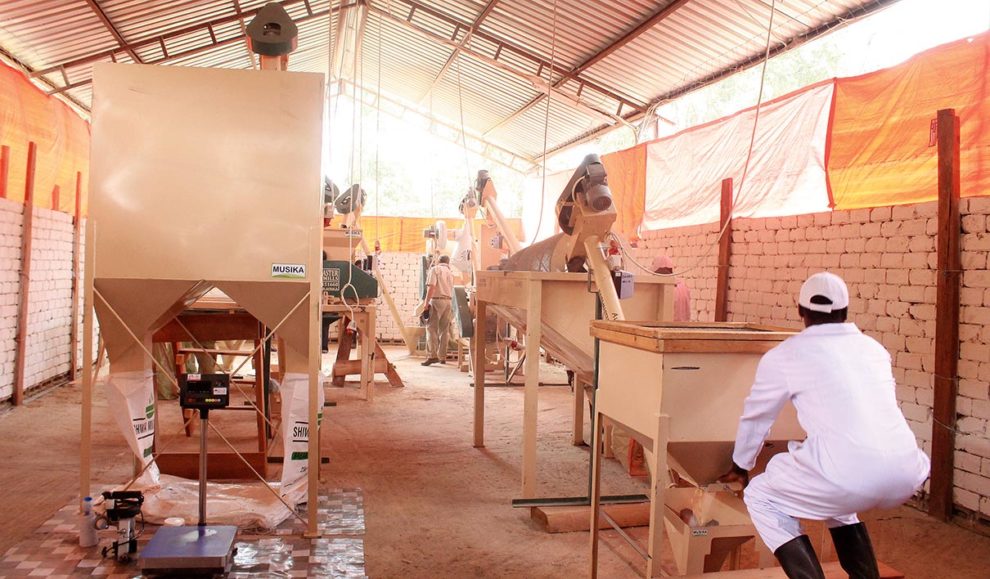 KELVIN MBEWE, Shiwang’andu
THE price of mealie-meal in Zambia has seen a fluctuating trend due to various reasons. Prominent among these reasons is the high demand for the commodity which is used to prepare nshima, the preferred food for many Zambians.

Another reason that makes mealie-meal expensive is the distance from the source to the markets. Most milling companies are based in urban areas and when you factor in the cost of transportation, mealie-meal tends to be expensive in rural areas where the commodity is supplied from urban areas.
A good example is Shiwang’andu district in Muchinga Province. The commodity is fetching around K90 and K120.
It is for this reason that Government, through Musika Agricultural Initiative and Manshya River Enterprises, thought it wise to set up a milling facility in the area to reduce the price of mealie-meal.
According to the stakeholders, the initiative is also meant to encourage the locals to venture into farming, as the country embarks on economic diversification.
Musika has procured an ultra-modern milling plant worth about US$51,300 which it has given to Manshya River Enterprises to operate and produce mealie-meal in Shiwang’andu.
“Our aim is to increase Manshya River’s ability to procure greater volumes of crop which will trigger a rise in production from the rural communities, thereby increasing their household income,” said Musika director of finance Victor Mushala.
The initiative has cheered farmers in the area who witnessed the official opening of the milling facility which was graced by Muchinga Province permanent secretary Bright Nundwe on October 9, 2017.
“Due to the high prices of mealie-meal here, we resolved to eat nshima once in a while. We eat wheat in place of nshima, but with this milling plant, we will eat more nshima and save the wheat for making bread,” said Flavio Kangwa, who grows maize, soya beans and groundnuts.
Mr Kangwa said the milling plant has also helped shorten the distance to markets where people were buying mealie-meal.
“Previously we had to cycle to the road side to find market for our maize. It was not easy, as you can see that the road is not so good,” he said.
And Martin Chanda said the milling plant has boosted business activities in Shiwang’andu and surrounding areas.
“I’m from Shifukutu area and I believe that this is a solution to our farming problems. We used to grow [maize] for consumption alone, but we will now produce more so that we can sell some to earn some income and cater for household needs,” Mr Chanda said.
And Musika corporate affairs manager Pamela Hamasaka said the initiative is meant to empower local farmers who are based in remote parts of Shiwang’andu.
“Every investment that we make is channelled to the private sector who operate in remote areas. Shiwang’andu is one of them, there isn’t much business activity here. The whole idea of supporting them with a milling facility is to ensure that they work with the local farmers,” she said.
Ms Hamasaka said the local farmers will benefit by way of supplying the milling facility with maize and soya beans.
“The milling plant will also produce feed for their livestock,” she said.
And Manshya River Enterprises director Charles Harvey said the initiative will uplift the status of farmers in the area.
“Our new slogan is that ‘we want to be farming from here, producing mealie-meal from here and consuming from here to ensure that the money remains here’,” he said.
He said this business venture has already started.
“We have already bought over 9,000 bags from over 300 farmers. Our local farmers were previously exploited by briefcase buyers who bought the maize at a cheaper price and sold it at expensive prices. We are buying at K65 per bag [50kg)] and providing transport,” he said.
And speaking at the same function, Mr Nundwe called on farmers to enhance their farming capacity and produce more maize and other cash crops.
“Our country enjoys good rains in all parts, especially here in Muchinga, Northern and Luapula provinces. It is therefore necessary to do the right thing by utilising this potential,” he said.
Mr Nundwe expressed confidence that the milling facility will allow for the production of affordable mealie-meal and also empower the locals with jobs.
“I’m reliably informed that locals are now able to buy mealie-meal at K65 from about K100. That is very good news and I would like to commend Musika for this timely investment,” he said.
The project is funded by USAID and the Embassy of Sweden.
“As a non-profit organisation that stimulates and supports private investment in the stakeholder market, Musika is supporting businesses that buy and process agricultural commodities to establish long-term commercial relationships with smallholder farmers,” Mr Mushala said.
He restated Musika’s commitment to supporting the development of improved market relationships in Zambia’s remote areas.
Smallholder farmers in Muchinga Province therefore need to take advantage of this business opportunity by increasing their levels of production.