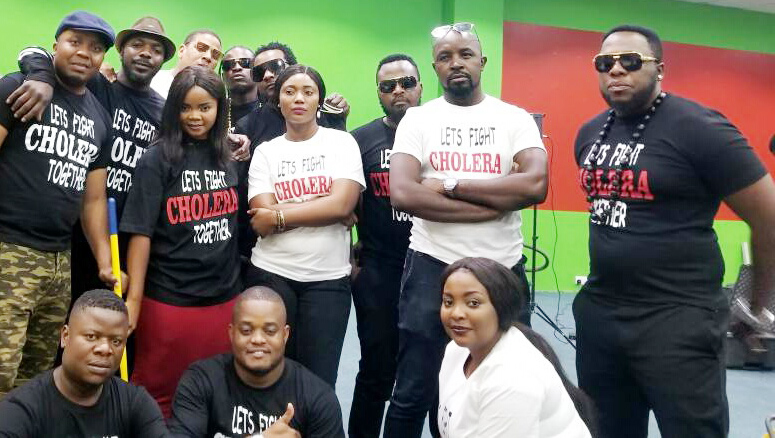 THELMA BWALYA, Lusaka and NDANGWAH MWITTAH, Livingstone
GOSPEL and secular artistes have come together to help fight the cholera epidemic by releasing a song titled Sobemo (Come and Join), which advises on how to avoid getting cholera.

The song was released on Wednesday together with the video and features the likes of JK, Wille, Kayombo, Felix, Dambisa, Mainza Chipenzi, Ephraim, Kings Malembe Malembe, DJ Cosmo, Leo Muntu, Mic Burner, Taonga, Rhoda and Charlie.
The song is basically encouraging people to be clean and healthy as the country is fighting cholera.
The idea of the song was from JK who contacted the other artistes that were available and came up with the song.
In the song, the artistes are urging everyone to be clean as it is everyone’s responsibility.
They encourage the nation to unite in the fight against cholera by boiling water, washing hands and not to compromise because a safe lifestyle begins with everyone.
“The song is just talking about sensitisation about the cholera pandemic, people should be hygiene by washing hands and taking care of themselves and not be careless,” JK says. “Let’s be together to fight it.”
Dambisa adds: “Basically, it’s just encouraging people to come together and work together in fighting the disease going around.”
The song was produced by Magician at Crystal Ball Entertainment while the video was done by Mainza.
Meanwhile, the Zambia Association of Musicians (ZAM) says they are happy with the measures that have so far been taken by the government to contain cholera.
“A walk in the central business district of our capital has brought a sigh of relief compared to the streets that were filled with vendors for a long time. The vendors of course covered the beauty of our capital city as they abandoned the designated trading places,” ZAM chairman Njoya Tee says.
“There were issues of inadequate sanitary facilities, posing a danger to health. Congestion also brought about security risks to town-goers while piracy levels went high. Piracy for now remains a topic for another time.
“Of course, the driving out of vendors from the streets will negatively impact on the survival of a lot of youths and women who support families through trading, but it will bring sanity to the city at the same time.”
Njoya says they are alive to the fact that Statutory Instrument (SI) number 79 of 2017 which restricts gatherings of more than five people or public ceremonies will affect musicians. Still, they are urging musicians and other entertainers to go by the SI.
“On the other hand, having utilised the festivities for business, we are aware that business is usually slow in the first few months of the year, which is why we spend more time in studios and video shoots, apart from restrategising,” he says.
“ZAM feels that the current status-quo requires the country to revisit the ‘Keep Zambia Clean Campaign’. We would be more than glad to avail our abilities and capabilities to make the message louder.
“As musicians, we know the power of influence we have and it is important that we use both individual and corporate platforms such as Facebook, Twitter and WhatsApp for positive change. We urge all the citizens to avoid making fun of the situation considering that lives are being lost and the business environment has come to a ‘standstill’.”

Tagscholera act get on musicians

Everything fine for Slap D
Sotambe opens for submissions