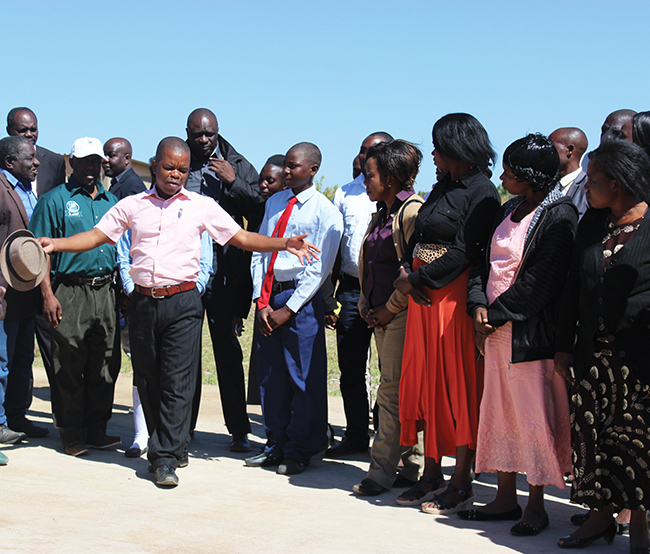 MWAZIPEZA CHANDA, Lusaka
COMMUNTY members have been urged to take ownership and contribute to infrastructure developments being undertaken by Government and co-operating partners in rural areas.
Deputy Minister of Education, Science, Vocational Training and Early Education Sydney Mushanga said many rural communities are benefitting from development projects but the future maintenance and success of projects is dependent on community involvement.
He was speaking during a tour of a construction site for a solar-powered internet school being funded by Samsung and Habitat for Humanity at Hamududu Primary School in Kabwe.
â€œFor this project to be sustainable, I would like to see more community involvement be it in the form of building materials or labour and I appeal to the local leadership to get involved in the project,â€ Mr Mushanga said.
He said the construction of the internet school at a rural location is encouraging as it would empower not only pupils but the community in general as they would have access to resources through the internet.
â€œThis is historical, because an ICT facility is being established in not an urban or peri-urban but a rural area. Government is encouraged by the initiative shown by Samsung and Habitat for Humanity as it ties in with the national vision of the Patriotic Front,â€ he said.
Mr Mushanga, who is Bwacha member of Parliament (MP) in Kabwe, said the internet school would be fully equipped with the curriculum and would allow teachers and pupils an opportunity to access essential resources to improve their quality of education.
Samsung Zambia business leader James Chona said his organisation is committed to empowering rural communities and the establishment of a solar-powered internet school is meant to demonstrate the focus of the brand in Africa.
And Habitat for Humanity board member Irene Musonda said the partnership between her organisation and Samsung has seen them draw up several empowerment programmes.
â€œThe collaboration with Samsung involves K2 million and apart from the school, we are also constructing 18 houses in Kabweâ€™s Makululu township and Ndolaâ€™s Chipulukusu area to benefit vulnerable families,â€ she said.