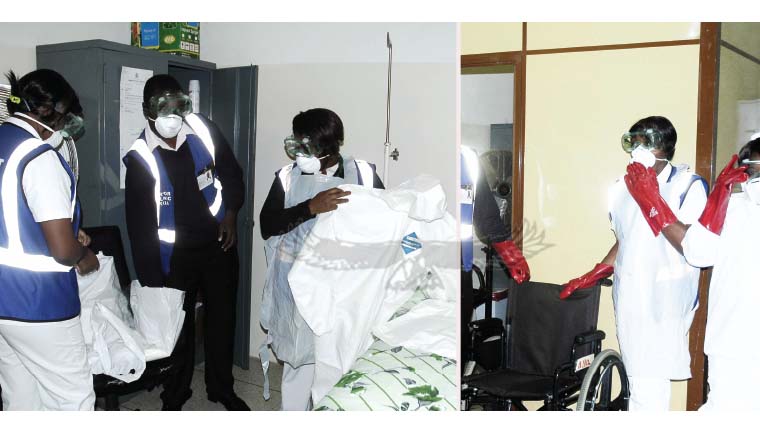 By ALVIN CHIINGA
A red alert raised over five people in Zambia suspected to be Ebola patients has turned out to be a hoax after they all tested negative to the deadly haemorrhagic fever.
Deputy Minister of Health Chitalu Chilufya has confirmed that the five were quarantined for suspected Ebola virus disease (EVD) in Mumbwa and Eastern Province but tests have revealed that they are free of the disease.
â€œI can confirm that close to five suspected cases of Ebola in Mumbwa and Eastern Province have tested negative and people should not panic,â€ Dr Chilufya said yesterday.
EVD or Ebola haemorrhagic fever (EHF) is a disease of humans and other primates caused by an ebolavirus.
Symptoms start two days to three weeks after contracting the virus, with a fever, sore throat, muscle pain and headaches.
The virus may be acquired upon contact with blood or bodily fluids of an infected animal.
Over 1,900 people in West Africa have died of the disease since its latest outbreak in February.
Dr Chilufya said Government has put in place adequate surveillance systems at border entry points.
He said there is no case of Ebola in Zambia and allayed fears of an outbreak.
Dr Chilufya also said Government initially set aside K10.6 million Ebola response funds and has in total allocated K106 million for up-scaling preparedness.
He said there is a collective approach to ensure the early detection of Ebola in Zambia.
Dr Chilufya also said Zambia will today join other African countries at a one-day African Union (AU) summit on Ebola in Addis Ababa, Ethiopia.
The emergency summit will look at expanding responses to the Ebola crisis.
It is aimed at developing a common understanding of Ebola.
Meanwhile , JIMMY CHIBUYE reports from Chipata that Minister of Foreign Affairs Harry Kalaba says Zambia has taken the outbreak of Ebola very seriously as evidenced by the Ministry of Health setting aside K106 million as part of its preparedness to handle the disease.
Mr Kalaba said this when he featured on Breeze FM here on Friday.
He said Government has taken very aggressive measures to ensure that Ebola does not break out in Zambia.
â€œZambia has taken up the fight against Ebola very aggressively and the Ministry of Health has set aside K106 million, if my memory serves me right, for the same pandemic,â€ he said.
Mr Kalaba said Zambians should â€œraise a red flagâ€ when they notice people showing symptoms of Ebola.
He said Zambia will continue with the thorough screening of people entering the country.
All border areas have been put on high alert and Government has bought protective clothing and scanners for officers at the borders.
Ebola cannot be handled in isolation and the AU has called for an urgent meeting starting today in Addis Ababa.
Eastern Province permanent secretary Chileshe Mulenga said officers at Mwami, Chanida and Lusunta border posts have been trained to identify potential cases of Ebola.
Dr Mulenga said both Ministry of Health officers and security personnel at border posts have been empowered with sufficient knowledge on Ebola.