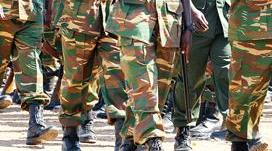 MAYENGO NYIRENDA, Chinsali
GOVERNMENT plans to build a military barracks in Muchinga Province for the Zambia Army, provincial permanent secretary Bright Nundwe has said.
Mr Nundwe said land for the project has already been found and that construction is scheduled to begin this year.
He was speaking in an interview in Chinsali on Thursday.
Mr Nundwe said Government has also found and secured land in Shiwangâ€™andu for the construction of a Zambia National Service (ZNS) camp.
â€œWe are planning to put up a barracks here and we want to see every single facility which is in Lusaka and other provinces to also be found here,â€ Mr Nundwe said.
He said President Lungu is in a hurry to ensure Muchinga Province has all institutions needed for government programmes.
Mr Nundwe said Muchinga is the only province in Zambia which has two public universities.
He said Paul Mushindo University, which is under construction, is expected to open next year.
Meanwhile, Mr Nundwe says armyworms and stalk borers have been contained in the province.
He also said the distribution of farming inputs under the Farmer Input Support Programme (FISP) under the e-voucher system will be completed next week.