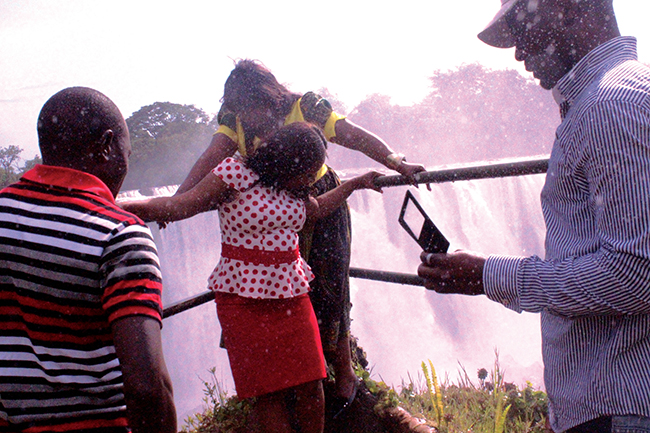 A GROUP of local tourists having fan at one of the waterfalls in the district.

KNOW YOUR DISTRICT with HENRY SINYANGWE
KNOWN as the land of plenty for its unique tourism attractions and arable land, Mporokoso is one of the districts in Northern Province.
Mporokoso was created soon after Zambia attained independence in 1964.
According to the local authority, Mporokoso also administered Kaputa and Nsumbu areas.
However, Kaputa was made to operate on its own as a council, including the recently created Nsama district.
Mporokoso, which has a surface area of 12,043 square kilometres, shares boundaries with Kaputa and Mpulungu districts in the north, Kasama and Mbala districts in the east, Luwingu district in the south and Kawambwa to the west.
The district lies 178 kilometres west of Kasama, the provincial capital, and 90 kilometres north-east of Kalungwishi River bridge, which borders Kawambwa in Luapula Province.
The distance from Mporokoso to Kawambwa is 141 kilometres.
RAINFALL
According to records, Mporokoso receives more rain than any other district in Zambia.
The average annual rainfall is 1,500mm, with maximum temperatures ranging between 30 degree and 35 degrees. The district has a long rainy season, which begins in August and lasts up to May.
District council secretary James Muwowo says Mporokoso is also one of the biggest districts in Zambia and much of the land is inhabited, especially between Luangwa and Kalungwishi rivers, thus creating conditions conducive for game ranching.
Mr Muwowo says due to extensive chitemene (shifting cultivation) widely practiced in the area, the woodlands are being depleted at an alarming rate.
â€œThis is very common in areas locally habitated. The district has one forest reserve F193, which recently had been invaded by the locals for chitemene cultivation,â€ he says.
In terms of infrastructure development, Mporokoso is enjoying a fair share of the national cake.
Government has embarked on the construction of various township roads and the 178-kilometre Kasama-Mporokoso road which is nearing completion.
Various schools, including Lunte Girls Secondary School, have also been constructed in the area.
â€œProgress in the construction of health posts across the district is being made as the district is one of the beneficiaries of the 650 being constructed across the country,â€ Mr Muwowo says.
TOURISM
In terms of tourism, the district has several waterfalls across its rivers and streams that are perennial in nature.
Mr Muwowo, however, says there has been inadequate marketing of the tourism sites in the area.
Notable big rivers are Mutotoshi, Luangwa, Kalungwishi and Lufubu.
The district has four waterfalls namely; Kapumo, along the Mporokoso-Kawambwa highway, Mumbuluma, about 60 kilometres from Mporokoso on the Luangwa River, Lumangwe along Kalungwishi River, about 11 kilometres downstream from Kalungwishi River bridge and Kabwelume Falls, about 25 kilometres from the Kalungwishi Bridge.
Mr Muwowo says the falls are earmarked for hydroelectricity generation and feasibility studies have already been done.
Mr Muwowo says the Lumangwe water falls, which is on the Kalungwishi River about 84 kilometres from Mporokoso, is also a national monument site.
â€œThe site was declared a national monument in 1964, the year of Zambiaâ€™s independence and covers a total surface area of 65 hectares. The falls have the second largest curtain of falling water after the Victoria Falls,â€ he says.
POPULATION
According to the 2010 national census, Mporokoso has a population of 100,993.
â€œOf these, most people occupy the outlying areas which are predominantly rural folks. The town grew from a small district as a result of new opening areas of development,â€ Mr Muwowo says.
The district has two parliamentary constituencies – Mporokoso central under Neviley Wilombe and Lunte, represented by Felix Mutati, which have 22 wards.
The district has seven traditional leaders including Chief Mumpolokoso, Chief Shibwalya Kapila, Chief Mukupa Kaoma and Chief Chitoshi.
Others are sub-chiefs Lushinga, Chisheta and Sunkutu.
There are two predominant ethnic groupings in the district, namely the Bembas in the eastern part of the district near Kasama and the Lungus, who occupy the southern parts.
Other smaller ethnic groupings include the Tabwas in the northern region near the Democratic Republic of Congo.
Mr Muwowo says apart from the few government and non-governmental organisation workers in the district, the majority in the community are peasants and small-scale farmers using the labour for intensive chitemene system of cultivation.
â€œThis ultimately affects food production in the district,â€ Mr Muwowo says.
The main important cash crops in the district are beans and maize.
Other crops of significance in the district are cassava, which is a staple food for many households. Millet is also commonly grown by many households.
Most of the beans grown in the district is sold on the Copperbelt and Lusaka, which provide a ready market.
Rearing of livestock is done on a very small scale. Cattle, pigs and goats are negligibly present while chickens are reared by most households.
In terms of banks, the district is serviced by National Savings and Credit Bank (Natsave). Some residents still access banking services in Kasama. District commissioner Bridget Chitundu wants other commercial banks to open branches in the district.
â€œWe are growing as a district and the demand for banking services is increasing. It is, therefore, important for banks to take advantage and tap into the growing market,â€ she says.
Overall, Mporokoso is a beckoning district with a myriad opportunities, and with favourable rainfall and rich soils, the area could become Zambiaâ€™s next food basket.

12th Parliament: What went down – Part 4

WCFCB provides care and support to its beneficiaries