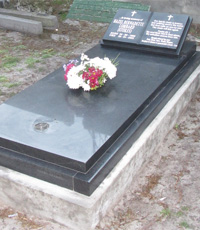 By CHRISTINE CHIHAME
A 54-YEAR-OLD mortician of Kitwe has pleaded not guilty to stealing a tombstone valued at K6,000.
When the matter came up for plea before Kitwe senior resident magistrate Prosper Mwila, Boston Nyoni told the court that he was authorised to get the tombstone.
But magistrate Mwila recorded a plea of not guilty because of Nyoniâ€™s explanation that he was given the tombstone.
â€œI enter a plea of not guilty because you cannot steal something which you were allowed to get,â€ Mr Mwila said.
This is in a case in which Nyoni of Wusakile township is facing one count of theft.
It is alleged that on August 22, this year, in Kitwe, Nyoni allegedly stole a tombstone from Godfrey Mwanalesa.
Magistrate Musonda adjourned the matter to September 29 for trial.

Beatings from in-laws scare away man