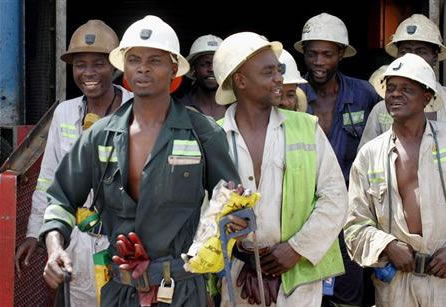 HONE SIAME, Kitwe
MOPANI Copper Mines (MCM) has laid off 3,051 workers while 1,249 employees have opted for voluntary separation as part of Glencoreâ€™s debt reduction strategy.
But Minister of Mines and Minerals Development Christopher Yaluma has condemned MCMâ€™s decision.
MCM is owned by Glencore, which in September this year announced its debt-reduction plan to reduce over US$30 billion net debt by US$10 billion by the end of next year.
Mineworkers Union of Zambia (MUZ) president Nkole Chishimba told a press briefing yesterday that MCM has formally informed affected employees on the matter.
Mr Chishimba said MCM will effect redundancies on November 21 and has urged all affected employees to manage their retrenchment package well.
â€œMopani has gone ahead to retrench over 4,000 workers. The workers have been briefed. The redundancies will be effected on 21st of this month. We painfully agreed because there is nothing we could do.
â€œWe are appealing to mining houses to always find other better ways of reducing costs when faced with external shocks. The battle we have gone through has not been a battle worth fighting for,â€ Mr Chishimba said.
He said President Lunguâ€™s six-day visit to the Copperbelt was significant in mitigating lay-offs as evidenced in the 1,600 other jobs that were saved at China Non-Ferrous Metal Mining Corporation Luanshya Copper Mines (CLM), which has placed Baluba mine on care and maintenance and sent workers on forced leave.
â€œWe had a lot of difficulties in dealing with CLM until the coming of the President. Management at that mine did not want to talk to us. Without President Lunguâ€™s coming, we would not have any progress,â€ Mr Chishimba said.
And Konkola Copper Mines (KCM) has placed its Nchanga underground mine on care and maintenance in view of external shocks, which he said, have not spared the company.
Mr Chishimba said the workers will be re-deployed to other KCM functions and that none of them will lose employment during the time Nchanga underground mine will be under care and maintenance.
National Union of Miners and Allied Workers (NUMAW) president James Chansa said the problems in the mining sector should not be politicised.
â€œOur economy is largely dependent on the mines. There is no opposition or ruling party on challenges we are facing in the mining sector.
â€œIf not well handled, [we] will be greatly affected. Contracting jobs are also affected,â€ Mr Chansa said.
He said mines in North-Western Province were intact and that jobs are safe.
MCM public relations manager Cephas Sinyangwe could not deny the retrenchment of workers but requested for a press query.
President Lungu directed mine unions to negotiate with MCM on how best to sustain jobs and production at the mining company.