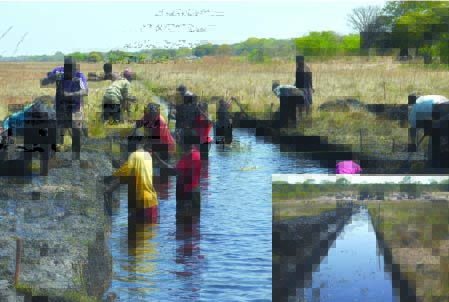 Pilot Project looks at mainstreaming climate matters in district, provincial policies
VIOLET MENGO – Mongu
THE mood among the people of Natonga village in Nalikwanda constituency of Mongu in Western Province was jubilant as they gathered for a long-awaited canal clearing flag-off ceremony.
Women burst into song while children ran towards vehicles approaching the villageâ€™s central location for the historic launch. A long-awaited dream was finally coming true for the villagers.
In Natonga village, Imalyo ward and the flood plains as a whole, drought and floods are common natural occurrences.
A significant number of people in this area live below the poverty datum line partly because of the recurrent floods and drought which affect their agricultural production.
Characteristic to this area is the clogging of canals arising from flood- induced siltation which culminates into water-logged agricultural fields.
To counter this, the Pilot Project on Climate Resilience (PPCR) was introduced in 2013 to restore agricultural productivity in the Barotse sub-basin under the auspices of the World Bank.
The Barotse sub-basin is one area that has negatively been impacted by climate change which has had a devastating effect on most vulnerable groups.
In Imalyo ward, the PPCR is focused on canal clearing so that once the waterways are cleared, agricultural activities can be conducted.
The project will benefit 6,402 people at a cost of K285,000.
Project manager Justine Liyali said PPCRâ€™s main objective is to improve the adaptive capacity of the communities in the Barotse sub-basin.
Mr Liyali said the project also aims to assist or work with the communities to build resilience to climate change so that the effect of climate change does not make their lives worse but improve them.
â€œThe project looks at mainstreaming climate matters in district, provincial and national plans and policies so that at these levels, the issues of climate change are taken into account,â€ he explained.
Mr Liyali said the project, which will run up to 2019, covers 14 out of the 16 districts in Western Province and one district in Southern Province.
â€œThe core philosophy of the project is participatory adaptation. The communities are involved in building their own plan for adaptation and whatever interventions are taken, the communities themselves get involved and are helped by facilitators,â€ Mr Liyali stated.
The communities assess their own climate risks with the support of facilitators from non-governmental organisations that work in partnership with local district staff.
Once they identify the risks that they face, they make a plan on how to respond to the hazards and apply for funding from PPCR.
Mr Liyali said there are two types of support at community level: infrastructure and adaptation grants which go up to US$10,000 each.
And David Kaluba from the Inter- Ministerial Secretariat on Climate Change said the PPCR focuses on three areas.
These are participatory adaptation, climate resilient infrastructure and strategic national support.
â€œAt the core of this project is the goal of ensuring food security through strengthening the capacity of communities such as Natonga to cope with the impacts of climate change,â€ Mr Kaluba said.
In addressing the problems of climate change, PPCR is also implementing an initiative called Strategic Programme for Climate Resilience.
Across the Barotse sub-basin, an estimated 135,000 people have been targeted and will benefit from the financial support provided under the PPCR initiative.
Since 2000, when the national adaptation programme of action was done, the Barotse sub-basin was identified as one of the vulnerable areas to the effects of climate change.
The project also focuses on the Kafue sub-basin covering Southern and Central provinces.
Speaking on behalf of the Barotse Royal Establishment, Induna Ineta Tawila Silumbu said poverty alleviation initiatives, especially among indigenous people, are commendable.
Induna Ineta said it is gratifying that the people of Natonga village may no longer continue living in poverty once they embark on agricultural activities under PPCR.
And Dr Danny Kalyalya, the then World Bank Africa Group I executive director, said the global financial institution is keen to reach out and work with the Zambian government in an effort to combat extreme poverty and reducing inequality.
Dr Kalyalya, who is also former Bank of Zambia deputy governor, said the World Bank will ensure that there is inclusiveness in efforts aimed at attaining sustainable development.
â€œThis project is World Bankâ€™s contribution to empower the community. We join you in your difficult task of delivering development to the people,â€ Dr Kalyalya said.
During the implementation of PPCR, emphasis is being made on how usable the land along the canals will be after the waterways have been cleared of silt.
Focus is also being placed on the kind of sustainability mechanism which is going to be instituted to ensure that the canals are not clogged again as this will in the long run lead to food security and poverty reduction.